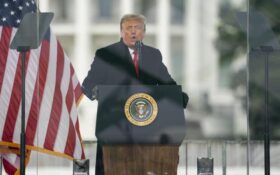 A month ago, former President Donald Trump announced a campaign for president, and he teased another announcement Wednesday.

“I will be making a MAJOR ANNOUNCEMENT tomorrow,” Trump said Wednesday, via Truth Social.

The following day, Trump announced a series of trading cards, available only as digital files. Conservatives — even diehard Trump supporters — were left confused and disappointed by this unlikely endeavor.

Instead, the former president unveiled digital cards depicting him dressed up as a hunter, a cowboy, an astronaut, a superhero or a football player that can be purchased for $99… each.

Some voters encouraged Trump to focus on more serious endeavors, like other presidential candidates.

“Oof… I’m starting to think he’s not reading the room,” one Twitter user responded, laughing. “I voted for him twice btw.”

One Twitter user put it more succinctly. “I think he just jumped the shark,” she said.

Some conservatives turned their disappointment into a meme.

Trump set himself behind other Republican contenders — specifically Florida Gov. Ron DeSantis — with this gaffe, others said.

Looks like the first DeSantis 2024 ad is out. pic.twitter.com/aoE9gxHd9D

“This guarantees he will not win the primary,” said another.

Buyers receive random images, without any way to select a certain one. The buyers can resell them, but a third party called NFT INT LLC will receive a 10 percent cut of the resale due to a licensing deal. The Trump campaign itself does not collect any money from this enterprise.

Later on Wednesday, Trump released a campaign video about the First Amendment, but it was overshadowed by the previous announcement.