Trump's lawyer strikes back at investigators - The Horn News 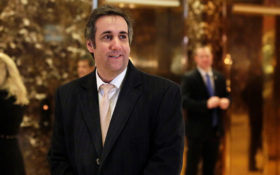 President Donald Trump’s personal attorney, Michael Cohen, is trying to prevent federal investigators from using materials the FBI seized in a search of his Manhattan office, apartment and hotel room this week.

A federal prosecutor’s office said a hearing has been scheduled before U.S. District Judge Kimba Wood for Friday morning to address Cohen’s request for a temporary restraining order related to the judicial warrant that authorized the search.

Federal agents seized records on a variety of subjects in the raid on Monday, including payments that were made in 2016 to women who might have damaging information about Trump.

Those people spoke on condition of anonymity to discuss the confidential details.

It was unclear how much prosecutors might have to reveal about the investigation in open court in the hearing scheduled for Friday.

Trump has called the raids a “witch hunt,” ″an attack on our country,” and a violation of rules that ordinarily make attorney client communications confidential.

Those confidentiality rules can be set aside under certain circumstances if investigators have evidence that a crime has been committed.

Public corruption prosecutors in the U.S. attorney’s office in Manhattan are trying to determine, according to one person familiar with the investigation, if there was any fraud related to payments to Karen McDougal, a former Playmate, and Stephanie Clifford, who performs under the name Stormy Daniels.

McDougal was paid $150,000 in the summer of 2016 by the parent company of the National Enquirer under an agreement that gave it the exclusive rights to her story, which it never published. Cohen said he paid Daniels $130,000 in exchange for her silence about her claim to have had a one-night-stand with Trump.

The White House has consistently said Trump denies either affair.