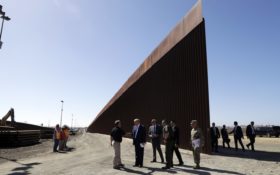 Donald Trump staked his 2016 presidential campaign on a pledge to build a “big, beautiful wall” on the U.S. border with Mexico — and he just took a major step toward keeping his promise.

Trump just announced he has enough funding to build 885 miles of new fences on the southern border.

And he’s found a clever way to maneuver the money to the wall’s construction.

Appropriate, supporters say, since the southern border is essentially one huge, uncontrolled crossroads for drug cartels. Backers say the move is like killing two birds with one stone.

Federal authorities stopped 250,000 pounds of methamphetamine and 2,465 pounds of fentanyl at the border… but they have no idea how much they may have missed.

Then again, this isn’t exactly news: everybody, Democrats and Republicans, has known the border is a drug runner’s paradise for years.

Barack Obama’s FBI testified in front of Congress back in 2019 that “most of the cocaine, foreign-source marijuana and methamphetamine, and Mexican-source heroin available in the United States is smuggled into the country across the” Southwest border.

President Trump told the country from the Oval Office that “the cost of illegal drugs exceeds $500 billion a year.” But Pelosi and Schumer only set aside $1.375 billion for the Wall this year — so Trump took matters into his own hands.

So far, he’s built about 101 miles of the Wall and he plans to supercharge that amount this year.

His son-in-law, Jared Kushner, plans to set up a live webcam so that Americans can watch Trump build the Wall live on the air.

But the president is going to have a fight on his hands, as usual.

Senate Democrats, led by Schumer, accused President Trump of “robbing the Defense Department” in order to “boost his own ego.”

Washington’s “open borders” supporters will also continue their fight in the courts. The country’s top liberal legal pressure group, the ACLU, promises to keep on suing until it finds a friendlier, liberal activist judge.

Dror Ladin, an attorney with the ACLU’s National Security Project, promised “the ACLU won’t rest until” the president’s “xenophobic wall” is “blocked once and for all.”

Meanwhile, border security organizations are applauding Trump’s move, saying he must not let anything keep him from stopping the flood of illegals and narcotics over the Rio Grande.

“Trump must keep his promises,” said the Federation for American Immigration Reform (FAIR). “There were an estimated 14.3 million illegal aliens in the United States – a number which rises every day.”

FAIR says people who support Trump’s decisive action on the Wall can “call your representative and senators and let them know you support full funding for the wall.”

But President Trump proved this week that he’ll keep Americans safe from MS-13, human traffickers, and thousands of pounds of opioids — whether Democrats like it or not.