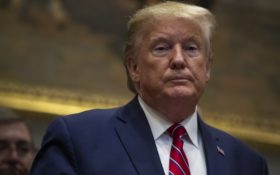 And it has liberals seething.

This one isn’t about the ongoing boom as the economy soars to new highs almost daily.

It’s about his decision to launch a drone strike in Iraq to take out Iranian General Qasem Soleimani, a radical Islamic terror mastermind feared throughout the Middle East and responsible for untold bloodshed.

The Trump campaign has run some 1,000 spots on Facebook touting that success – part of an extensive effort to repeat his 2016 playbook and win the social media game. Buzzfeed reports that the campaign has spent $2.3 million on some 33,000 Facebook ads within the last 30 days alone.

That’s more than twice as many as any Democrat in the race right now.

There’s a reason for that specific focus.

Unlike a TV spot, an ad on social media can more directly drive cash into the campaign. Many of the Trump ads link to a survey that ask if supporters agree with Trump’s actions “to take out the very dangerous Iranian terrorist leader.”

They also offer other ways to engage including singing up for emails and text messages.

And, of course, they ask supporters to donate cash to the campaign.

Matt Braynard, who served as data director for Trump’s 2016 effort, praised this methodical approach and the use of the latest headlines.

“From a campaign perspective, any time the president accomplishes something – and fighting terrorism is among his biggest campaign promises, keeping our country safe – that is grounds for making the argument that he should be reelected,” Braynard told The Washington Post.

But clearly, the current team is expanding on the approach used with so much success in 2016 by circumventing the mainstream media and going straight to supporters.

Along with social media ads, many are getting text messages from the campaign, also touting Trump’s success.

“Pres Trump made our Military STRONG again!” one such message said, while others were sent after Trump spoke to the nation about Iran asked them to rate his comments in a poll.

The left is furious.

Liberals are screaming – claiming Trump is politicizing national security by turning his decision into a campaign talking point.

No one… they say… could be that crass…

Of course, in 2012 then-President Barack Obama used his order to assassinate al Qaeda terror mastermind Osama bin Laden in his own campaign ads.

“The commander-in-chief gets one chance to make the right decision,” the spot noted.

Former President Bill Clinton spoke in the spot, testifying to the difficulty of Obama’s decision.

“Suppose the Navy SEALs had gone in there and it hadn’t been bin Laden? Suppose they had been captured or killed?” Clinton said. “The downside would have been horrible.”

But, he said, Obama “took the harder, more honorable path” in giving the order:

At the time, the Mitt Romney campaign slammed the ad.

“It’s now sad to see the Obama campaign seek to use an event that unified our country to once again divide us, in order to try to distract voters’ attention from the failures of his administration,” they said.

However, the strategy paid off: Obama won re-election in part by touting his foreign policy expertise – including the bin Laden assault.

After all, he had no other choice. He certainly didn’t want to call attention to the failing economy.

The coming election will be quite different since along with overseas success in stopping Iran, President Trump will no doubt continue to tout his administration’s booming economic success.

In other words, prepare for a lot of political ads on Facebook this year.