Trump’s GENIUS border wall plan (Mexico WILL pay for it!) - The Horn News 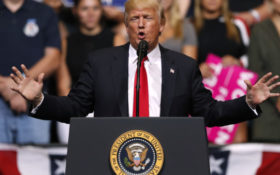 For years, politicians have treated hard-working American taxpayers like piggy banks, pulling every last cent they can out of each and every one of us.

Finally, President Donald Trump is reversing that trend. He announced an ingenious new plan this week to enact one of the biggest promises of his campaign… and to make Mexico pay for it.

And the tree-hugging liberals are going to have a hard time crying over this one, because it’s also good for green energy.

Trump has painted liberals into a corner of their own making, because his new plan involves not only building a wall along the Mexican border, but covering it with solar panels so it can generate clean power.

Who’s paying for the wall? Mexico, whose citizens would be buying some of the energy.

In other words, the wall is paying you, the American taxpayer!

Covered in those panels, the wall could become a major energy source that could plug into the grid and lower the burden on American taxpayers in any number of ways as it brings power to residents from San Diego to San Antonio to Tijuana.

It’s the ULTIMATE free-market solution to a problem facing taxpayers… and one that, thanks to the very same market… could be solved for ZERO money.

Americans would even TURN A PROFIT on the deal!

With solar development now cheaper than ever, the market is ready to step in and help in ways that they never would under the burdensome restrictions and heavy regulations of a liberal regime.

Thanks to Trump’s approach, they could have the shovels in the ground in a matter of weeks, and Americans will benefit almost as immediately.

Two experts wrote in The Wall Street Journal earlier this year that a solar wall could be built along the entire 2,000-mile border for $1 billion… or $19 billion LESS than the over-hyped cost estimates in the mainstream media.

They not only called it “technically and economically feasible,” they said it would be “wildly profitable.”

On the ground, solar expert Tom Gleason of Las Vegas — who is hoping to help build the solar wall — told the Review-Journal that he knows exactly how to do it. He said his proposed wall would not only turn a profit, it would be highly secure.

Even if would-be border crosses smashed the panels, they’d find barbed wire and steel mesh inside.

The operation of the border wall solar farm itself, once completed, could be leased to a private company, with Americans getting competitive rates for clean energy and the money from the lease going directly into the U.S. Treasury to offset — to REDUCE — the tax burden.

Once the wall is paid for – something Gleason estimated would take just 20 years, but others say could happen even faster – the money coming out of it is gravy for American taxpayers. The solar wall could even be used to sell power to Mexico, which has only recently starting buying electricity from across the border.

The country has vowed to get 35 percent of its energy from renewables by 2024, but so far isn’t even close to that goal.

Buying solar power from the wall could help them EXCEED the target.

Sponsored: This has 200 TIMES more antioxidant power than blueberries with the HIGHEST score ever recorded

That would mean his campaign vow would’ve been correct all along: Mexico would pay for the wall… and with clean, stable electricity at lower rates, they’d be happy about it, too.

American taxpayers would be even happier. Along with more money flowing into the Treasury WITHOUT the need for a tax increase, they would save money from the cost of the border patrol.

Right now, the agency has to employ hundreds… if not thousands… to sit and stare at empty stretches of desert.

The wall would mean a smaller and more responsive border patrol that can focus on trouble spots.

And that’s not the only way Trump’s environmental plan is saving American taxpayers BIG-LEAGUE money.

The liberals are shedding tears of Perrier over Trump pulling out of the Paris Agreement, but as his border wall plan shows he’s not abandoning clean energy.

He’s doing it on America’s terms, instead of dancing to the tune of elitist anti-American bureaucrats in distant capitals.

One study last year found that the Paris Agreement would cost the United States 400,000 jobs and wipe out $2.5 trillion of U.S. GDP by 2035. That’s trillions of dollars… stolen from our economy.

In real terms, each American family would suffer $20,000 in lost income over that time.

Americans would have LESS money, and pay MORE for their electricity, with rates jumping by between 13 percent and 20 percent, according to the analysis.

Instead, with Trump’s solar wall and other proposals, Americans will see MORE jobs, CLEAN energy, LOWER rates and – here’s the stunner almost unheard of in political history despite generations of empty promises – LOWER taxes, too.