Where to? Trump's foreign travel plans form - The Horn News 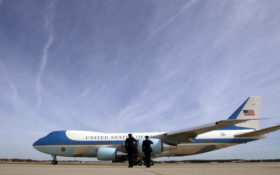 Trump has been burning up White House telephone lines calling his world counterparts and, during those talks, has committed to several trans-Atlantic trips.

He spoke Sunday with NATO Secretary-General Jens Stoltenberg and agreed to attend a NATO leaders’ meeting in Brussels in late May. Trump once dismissed the trans-Atlantic military alliance as “obsolete.”

Trump spoke with Italian Prime Minister Paolo Gentiloni on Saturday and promised to attend a late May summit of the Group of Seven leading industrial nations in Taormina, Italy.

In talks last weekend with German Chancellor Angela Merkel, the White House says Trump accepted her invitation to the Group of 20 economic summit in Hamburg, Germany, in early July.

World leaders are lining up to visit Trump at the White House, too.

British Prime Minister Theresa May was the first to sit down with Trump in the Oval Office. After their meeting, she announced at the White House that Trump had accepted an invitation from Queen Elizabeth II for a state visit, expected in the summer.

But thousands have protested the decision or signed a petition calling for the queen’s invitation to be withdrawn. May has said it stands.

Still, some meetings haven’t happened or remain to be scheduled.

Mexican President Enrique Pena Nieto canceled his Jan. 31 visit over disagreement with Trump over who will pay for the wall Trump has pledged to build along the U.S.-Mexico border.

The White House telegraphed a February visit by Canadian Prime Minister Justin Trudeau, but has yet to announce a date for it.