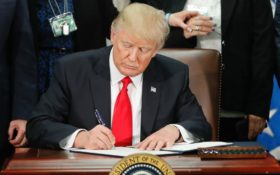 Building suspense about America’s role in the world, President Donald Trump planned to announce Thursday whether the U.S. would stay in a global climate pact. The White House signaled a withdrawal was likely, but Trump has been known to change his mind on such major decisions.

Withdrawing from the pact was one of Trump’s principal campaign pledges, but Top White House aides were divided, and Trump’s decision may not be entirely clear-cut. Aides were deliberating on “caveats in the language,” one official said.

Trump said Wednesday he was still listening to “a lot of people both ways.” The former reality TV star with a flair for drama later promoted his Rose Garden announcement in a tweet.

Everyone cautioned that no decision was final until Trump announced it. The president tends to seek counsel from both inside and outside advisers, many with differing agendas.

While traveling abroad last week, Trump was repeatedly pressed to stay in the deal by European leaders and the pope. Withdrawing would leave the United States aligned only with Russia among the world’s industrialized economies.

American corporate leaders have also appealed to the businessman-turned-president to stay in the pact. They include Apple, Google and Walmart. Even fossil fuel companies such as Exxon Mobil, BP and Shell say the United States should abide by the deal.

In a Berlin speech, Chinese Premier Li Keqiang said that fighting climate change is a “global consensus” and an “international responsibility.”

“China in recent years has stayed true to its commitment,” said Li, speaking in Berlin Wednesday.

Trump’s predecessor, President Barack Obama, enacted the deal without U.S. Senate ratification. A formal withdrawal would take years, experts say, a situation that led the president of the European Commission to speak dismissively of Trump on Wednesday.

Some of Trump’s aides have been searching for a middle ground – perhaps by renegotiating the terms of the agreement – in an effort to thread the needle between his base of supporters who oppose the deal and those warning that a U.S. exit would deal a blow to the fight against global warming as well as to worldwide U.S. leadership.

That fight has played out within the Trump administration. Trump met Wednesday with Secretary of State Rex Tillerson, who has favored remaining in the agreement. Chief strategist Steve Bannon supports an exit, as does Environmental Protection Agency Administrator Scott Pruitt.

Trump’s chief economic adviser, Gary Cohn, has discussed the possibility of changing the U.S. carbon reduction targets instead of pulling out of the deal completely. Senior adviser Jared Kushner generally thinks the deal is bad but still would like to see if emissions targets can be changed.

Trump’s influential daughter Ivanka Trump’s preference is to stay, but she has made it a priority to establish a review process so her father would hear from all sides, said a senior administration official. Like the other officials, that person was not authorized to describe the private discussions by name and spoke only on condition of anonymity.

Interior Secretary Ryan Zinke said Wednesday in Alaska that he had “yet to read what the actual Paris Agreement is,” and would have to read it before weighing in.