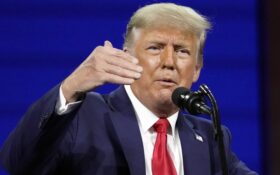 The media loudly dismissed it as an unhinged conspiracy theory.

Last year, then-President Donald Trump and members of his administration repeatedly claimed the coronavirus behind the global COVID-19 outbreak originated in a lab in Wuhan, China.

And they were put on blast for it, even called racist and xenophobic.

The New York Times slammed it as a “fringe theory” in a headline last year.

The Washington Post tried to debunk it as “conservative media misinformation,” while CNN dismissed it as “misinformation and conspiracy theories.”

And they were hardly alone.

@NPR might’ve been the most dismissive, running stories on back to back days suggesting there was nothing to the allegations & that scientists “debunk[ed]” & “dismiss[ed]” the idea of an accidental release.

They were, in retrospect, entirely wrong, but memoryholed these pieces. pic.twitter.com/JGYatFMSts

Now, this week, most of those same media outlets have had to eat crow and do a complete reversal after The Wall Street Journal revealed that six workers at the Wuhan Institute of Virology were hospitalized with the symptoms that mark this infection in November 2019, making them potentially the earliest known cases… and possibly the “patients zero” of the pandemic.

The newspaper noted that those same symptoms are also part of more common seasonal illnesses, so it’s not clear if they had the infection.

Given their jobs and the timing, however, it’s awfully suspicious.

The report comes just after Dr. Anthony Fauci was asked earlier this month if he was convinced the virus evolved naturally.

“No actually,” he said at the United Facts of America: A Festival of Fact-Checking event. “I am not convinced about that, I think we should continue to investigate what went on in China until we continue to find out to the best of our ability what happened.”

Those comments came as a literal shock to the system – and suddenly, mainstream media outlets are now giving solemn credibility to a theory they spent most of the last year dismissing and outright trashing.

Sen. Ted Cruz, R-Tex., was quick to spot one of the most glaring examples of the media hypocrisy on this:

Sen. Tom Cotton, R-A.R., kept some of his own receipts:

One lesson for the media is that self-interested denials from the Chinese Communist Party do not equal "debunking." pic.twitter.com/awYnmSS01A

And naturally, the satirical website the Babylon Bee couldn’t help but get in a dig:

After World Realizes He Was Right About Everything, Alex Jones Appointed As New Head Of CDC https://t.co/iaFFSUdPE4

Originating in a lab doesn’t necessarily mean the virus was created there or that it was specifically “engineered” in some way, although that’s one possibility.

It could also mean the virus was isolated in nature and brought into the lab to study, and that researchers or other workers were exposed and became sick due to lax safety protocols.

Either way, since it can take days or even weeks before the symptoms appear, they likely didn’t even realize they were infected as they unwittingly carried the virus out into Wuhan, where the outbreak began in late 2019.

China has denied that.

But Beijing also hasn’t been forthcoming with the United States or the world about the specifics of how, when, and where the outbreak began.

That’s led many to suspect the something is off.

Fauci said he’s keeping all of his options open.

“Certainly, the people who investigated it say it likely was the emergence from an animal reservoir that then infected individuals,” he said at that event this month. “But it could have been something else, and we need to find that out. So, you know, that’s the reason why I said I’m perfectly in favor of any investigation that looks into the origin of the virus.”

But as Fox News points out, that’s not quite what he said last year.

Fauci told National Geographic last May that the evidence “is very, very strongly leaning toward this could not have been artificially or deliberately manipulated.”

“Everything about the stepwise evolution over time strongly indicates that [this virus] evolved in nature and then jumped species,” he declared, and at the time said he did not believe it leaked or escaped from the lab.

Trump is taking this as a vindication.

“To me it was obvious from the beginning but I was badly criticized, as usual,” he said in a statement. “Now they are all saying ‘He was right.’ Thank you!”