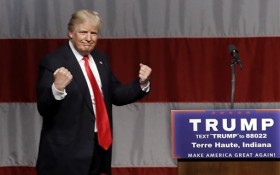 Donald Trump is taking his first steps toward raising the massive amounts of money needed for a national presidential race, aiming to broaden his primary insurgency into a full-fledged general election campaign and unite the fractured Republican Party behind him.

Trump is reaching out to party heavyweights, hoping to repair his sometimes-strained relationships with the Republican National Committee and big GOP donors whom he bashed repeatedly during the primaries.

On Thursday, his campaign named a finance chairman, Steven Mnuchin, who is chairman and chief executive officer of Dune Capital management LLC, a private investment firm, and previously worked at the New York bank Goldman Sachs. Mnuchin “brings unprecedented experience and expertise” to the fundraising operation, the campaign said.

Trump’s new efforts include taking pains to reassure party leaders that he wants to help Republican Senate and House candidates, some of whom are openly worried that Trump at the top of the GOP ticket will be a drag on their own campaigns.

Earlier this week, Trump’s final GOP foes, Ted Cruz and John Kasich, dropped out, clearing his path to the nomination. But some of the party’s big names are still keeping him at arm’s length. Neither former President George W. Bush nor Mitt Romney, the 2012 GOP nominee, plan to attend the party’s national convention in July.

Their reluctance to embrace Trump sends an unmistakable signal to their extensive fundraising networks, which include most of the GOP’s best-connected donors.

“You might have a lot of these donors sit on the sidelines,” said Spencer Zwick, who led Romney’s fundraising efforts and now serves as House Speaker Paul Ryan’s national finance chairman.

Members of the celebrity businessman’s campaign were to meet with the party’s national committee and enter a joint fundraising agreement needed for both his bid and for Republicans to maintain control of Capitol Hill, aides said.

“In order to really govern, we need majorities in the House and Senate. We’re going to work with the party to raise money for down-ballot races to be successful,” said Corey Lewandowski, Trump’s campaign manager, in an interview Thursday.

Trump, a billionaire who paid for most of his primary campaign by himself, acknowledges he would have to sell some of his holdings to muster the hundreds of millions of dollars for a general election bid, something he said he doesn’t necessarily want to do.

He said Thursday in a statement that he would be “putting up substantial money toward the general election,” following the $36 million in loans he previously made.

Yet he’s also beginning to take a more traditional route for his likely battle with Hillary Clinton, a Democratic fundraising powerhouse.

Many major GOP donors have never heard of him — or even know how to pronounce his name (muh-NOO-chihn). Like his new boss Trump, Mnuchin has a record of giving both to top Republicans and Democrats — including Clinton during her 2008 presidential run.

Trump hopes to tap into the RNC’s existing fundraising network, but some of the party’s big donors are reluctant to embrace him.

“High-dollar donors need to be convinced that Trump is going to be a serious candidate and won’t embarrass them,” said Charlie Spies, a veteran Republican operative with deep ties to party fundraisers.

This is all new to Trump. Through the end of March, he had raised $12 million, mostly from fans who clicked the “donate” button on his website or bought wares such as the ubiquitous red ballcap emblazoned with his slogan, “Make America Great Again,” campaign finance documents show.

That contrasts with Clinton, who has raised some $187 million so far and began her general election fundraising effort back in November by setting up a “victory fund” that can solicit huge checks for her campaign, the Democratic National Committee and state parties.

Clinton is spending the better part of this month on a fundraising, including stops in New York, Michigan, California and Texas. Trump, as of Wednesday night, had not a single fundraising event on the books.

While Clinton has well-established outside help, Trump’s allies are just beginning to organize.

Ed Rollins, who ran Ronald Reagan’s 1984 campaign, joined the pro-Trump Great America PAC as a senior strategist. “We’re going to figure out what the Trump campaign needs and can’t do by itself,” Rollins said on a super PAC conference call Wednesday.

Trump’s lean campaign team will also likely depend heavily on the RNC as he shifts to the 50-state task ahead. Yet the national committee is also counting on Trump to reciprocate by helping to fund its nationwide data operation and staffing expansion.

RNC members note that Trump has attracted many new voters to the party, who would likely be willing to give money. It’s unclear, however, whether he can attract enough elite donors capable of writing checks upward of $350,000, Spies said.

Trump will also name a transition team and a vice-presidential search committee. He says he has not truly begun the VP vetting process but will favor a Washington veteran.

Said Lewandowski: “When a complete outsider is picked to lead the ticket, it makes sense to have someone with government experience on it. He wants a strong executive who has a leadership role in D.C.”