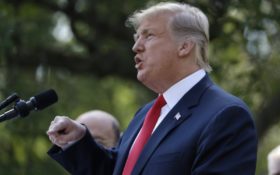 Rule one: Everything they don’t like is “racist” and ought to be illegal.

Rule two: Everything they do like is a human right that must be given to them for free.

But all that may come to an end, thanks to a clever new move taken by President Donald Trump. He’s using their own language against them to return America to the vision of our Founding Fathers — and to promote freedom more than any president in at least 7 decades.

For decades, Democrats have called everyone of their new policy a “human right.”

Bernie Sanders has rolled out a whole new “21st Century Bill of Rights” to replace the old one—and that’s nothing new. The Left has been replacing our constitutional liberties with socialist nonsense for decades.

Just look at them:

The list of handouts, giveaways, and free goodies gets longer every year — and make no mistake, the Left knows exactly what it’s doing.

Radicals like Reps. Alexandria Ocasio-Cortez and Ilhan Omar use the phrase “human rights” to make their tax-hiking, budget-busting, elitist measures more palatable… and then they use every agency of the government to force their policies on everybody else.

But Trump’s latest announcement is about to bring the whole charade crashing to the ground.

He just announced a new Commission on Unalienable Rights that will correct anywhere that Americans have “departed from our nation’s founding principles of natural law and natural rights.”

So, Pompeo promised that this new panel, which will meet at least once a month, will touch off “one of the most profound reexaminations of the unalienable rights in the world since the 1948 Universal Declaration” of Human Rights.

That’s the biggest push for freedom in 71 years — and it’s just getting started.

The new council is “a historic, meaningful step in advancing human rights around the world,” said Tony Perkins, president of the Family Research Council. That will include rights like “life, liberty, the pursuit of happiness, the freedoms of religion, speech, and assembly, and other principles upon which our nation was founded.”

The Trump administration has said this new panel will protect endangered Christians, who are being hunted down like animals all across the Middle East.

Naturally, radical activists and the Deep State have teamed up to deep-six this commission.

Leftists say the panel is already using some secret “code for religiously-infused opposition both to reproductive rights and to protections for members of the LGBTQ community.”

Sen. Bob Menendez, D-N.J., said the panel could be “used as another platform for the Trump administration to further erode U.S. leadership on human rights across the board.”

Senate Democrats will provide “robust oversight” over the new board, he said.

Menendez, who has been accused of sleeping with underage girls, may not be in the best position to lecture people about respecting people’s rights.

But prod just a little bit deeper, and you’ll see what they’re really worried about.

They’re worried it will drain the Swamp!

The website Just Security—an establishment “analysis” outlet that backs the impeachment of President Trump—says that other agencies in Foggy Bottom are “staffed with career civil servants” who “understand U.S. legal obligations” and are “steeped in knowledge of the human rights system in order to serve the Secretary of State.”

They’re wringing their hands that this new panel—appointed by Pompeo—will be “an end-run around the advice of government employees.”

This “sets a dangerous precedent,” Just Security says—because it puts the president in the driver’s seat, instead of shadowy Deep State operatives.

The stakes are high.

Trump is reclaiming the American Republic from bureaucrats that ignore the will of voters year-in and year-out.

He’s driving a stake through the heart of the Left’s “human rights” doublespeak.

And he’s restoring the Founding Fathers’ views of freedom in the United States.

“If it succeeds, it will face howls of opposition,” Philpott predicted, but it will also “begin to restore the credibility of the past century’s most important movement for justice.”

Trump always goes big—and the world may well be a freer place because of it.