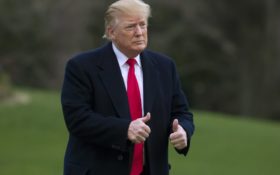 It’s CHRISTMAS in APRIL — and a very merry one indeed as President Donald Trump’s holiday prediction has just come true.

Back on Dec. 25, with the stock market taking a holiday break after a series of losses, the naysayers were out in force… taunting the president with yuletide jeer.

Rather than shutting up for a day or two and enjoying Christmas, they slammed Trump as the stock market plunged.

By Christmas Eve, the S&P 500 index had reached the lowest level in some 20 months.

You’d think NO ONE would want that, but Trump’s critics were practically cheering. They were hoping to unwrap an economic collapse for Christmas, just so they could blame it on Trump.

“The president believes he can tweet himself out of this bear market, and he is just making it worse,” Jared Bernstein, former economic advisor to Vice President Joe Biden, gloated to The Washington Post.

Bernstein even hinted that Trump could sink the entire economy!

But the president wasn’t about to let the grinches steal all our Christmas cheer.

In a holiday message to the nation, he gathered reporters to remind Americans that the economy was not only strong… but it was about to get even stronger.

“We have companies, the greatest in the world, and they’re doing really well. They have record kinds of numbers,” Trump declared.

Then, the longtime businessman offered Americans some sage investment advice for Christmas – and coal in the stockings of his critics.

The left mocked him for it, but he was right: At the time, Bloomberg noted the S&P 500 had its best valuations in five years – ie, the best value for the stock price. Another way of putting it is that stocks were at their cheapest in five years in terms of their overall value.

Trump said stocks were on sale. But they sure didn’t stay that way. As Business Insider recently pointed out, markets began to rally when they reopened the very next day.

That Dec. 26th “Santa Claus Rally” was the biggest one-day gain in the history of the Dow Jones Industrial Average, rising 1,086.25.

And it didn’t stop there.

Today, four months later, Americans who took the cash out of their stockings to invest in the stocks are having a very merry April. The market not only dug itself out of its hole, but it’s also growing at record pace again… just as Trump predicted!

On Easter Sunday, Trump took a bow for a job well-done:

Happy Easter! I have never been happier or more content because your Country is doing so well, with an Economy that is the talk of the World and may be stronger than it has ever been before. Have a great day!

It’s expected to get better from here as economists rapidly revise their projections for first-quarter growth.

Many had initially predicted 2.1 percent. Now, the consensus is hitting 2.4 percent, and the White House said even that’s on the low side, with economic advisor Kevin Hassett telling CNBC that it’ll come close to 3 percent.

“That’s a very different signal than people were expecting in early January,” he said.

Analyst say this bodes well for the president’s 2020 chances – if he can sustain it.

“The economy is strong and the unemployment rate is low. So this is an economy that any president of any party would envy,” Todd Buchholz, who served as economic advisor to President George H.W. Bush, told Neil Cavuto on Fox Business. “And the question is can President Trump maintain it?”

If he can, that will essentially eliminate the most common election-year criticism of an incumbent and potentially paralyze whoever wins the Democratic nomination.

“[Trump’s] driven the economy in a very successful way,” Buchholz said. “There are very few Democrats that are going to be successful in trying to claim that this economy is not strong.”

Very few… or more likely, none at all.