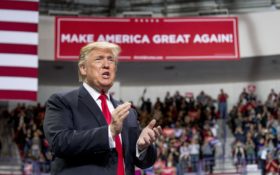 President Donald Trump’s oath of office was administered by Chief Justice John Roberts on Jan. 20, 2017 — which means that this 4th of July holiday marks his 894th day as commander in chief.

With less than a week until Trump’s 900th day in office, The Horn News wants to know what you think of the president.

Has Trump done a good job and fulfilled his promise of “Making American Great Again”?

Are you ready for a change in the White House?

Vote here in this urgent report card and let your voice be heard!

What is YOUR opinion?