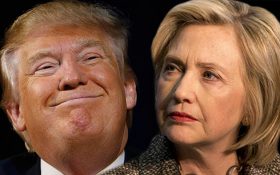 It all comes down to this. With just one day to go until the 2016 presidential election polls officially open, political analysts and statisticians are busy pouring over numbers.

According to polling data, the race is neck and neck in the popular vote. The Los Angeles Times reported Monday that Republican presidential candidate Donald Trump is up five points, while IBP/TIPP has Trump up just two points over rival Hillary Clinton. Meanwhile, Bloomberg polls have Clinton over Trump by three.

But the real story is the electoral college — and how red things are turning. In battleground state after battleground state, pollsters have noticed that Trump is taking a lead. In Ohio, Arizona, Nevada, Florida, Iowa, Trump appears to be outpacing Clinton among undecided voters.

But victory looks like it will go through New England. In both New Hampshire and parts of Maine, Trump has gained a groundswell of support in recent days.

With that, and the lead he’s gained in the South, here’s how the map looks. That image should keep Clinton supporters up tonight.