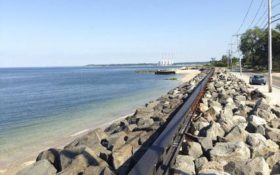 President Donald Trump will hold a roundtable discussion on Long Island on illegal immigration and gang violence that the White House is calling a “national call to action for legislative policy changes.”

White House spokesman Hogan Gidley says the discussion with law enforcement and local leaders will focus on “immigration loopholes” that allow the violent MS-13 gang “to infiltrate our communities.” MS-13 has been blamed for some two dozen killings on Long Island the past two years.

Trump has used the violence to bolster the urgency of his push to overhaul the nation’s immigration laws, as well as the need to build a border wall with Mexico and enact tougher travel restrictions. He’s also argued for loosening restrictions on law enforcement, encouraging police officers whom he calls “rough guys.”

“Please don’t be too nice,” he told law enforcement officials in a similar trip he made to Long Island last July.

Trump will also attend a fundraiser in his hometown of New York City on Wednesday evening. The 75-person dinner is expected to raise $5 million for the Republican National Committee and the president’s re-election campaign, the RNC said.

Last week, Trump used the word “animals” to describe some people who enter the country illegally, in response to a comment about MS-13. The president says he will continue to use the term in referring to the gang.

The White House also released a fact sheet Monday morning titled “WHAT YOU NEED TO KNOW ABOUT THE VIOLENT ANIMALS OF MS-13.”

MS-13, or the Mara Salvatrucha, is believed by federal prosecutors to have thousands of members across the U.S., primarily emigrants from Central America. It has a stronghold in Los Angeles, where it emerged in the 1980s as a neighborhood street gang, but it also has wreaked violence in cities and suburbs across the U.S., including Long Island.

The president has called for an end to “catch-and-release” policies, which generally refers to the release of illegal immigrants while they await immigration hearings instead of keeping them in custody as well as changes to rules governing minors and asylum seekers.

Gidley claims the policies “allow hundreds of thousands of illegal and unauthorized aliens to gain entry and release in the United States” and says they can be exploited by violent gangs, cartels, and drug dealers.

Many teenagers on Long Island have been held on gang accusations, swept up in various federal investigations.