Trump: "We're going to guard our border with..." - The Horn News 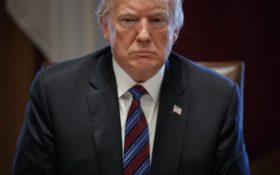 President Donald Trump said Tuesday he wants to use the American military to secure the U.S.-Mexico border until his promised border wall is built.

“We are going to be guarding our border with the military,” Trump said, calling the measure a “big step.”

Trump has been deeply frustrated about the lack of progress building what was the signature promise of his campaign: a “big, beautiful wall” along the Mexican border. He’s previously suggested using the Pentagon’s budget to pay for building the wall, arguing it is a national security priority.

The Department of Homeland Security, Pentagon and White House did not immediately respond to requests for comment on how such a plan might work.

Trump’s announcement came a day after administration officials said they’re crafting a new legislative package aimed at closing immigration “loopholes.” Trump has called on Republican lawmakers to immediately pass a border bill using the “Nuclear Option if necessary” to muscle it through.

“We cannot have people flowing into our country illegally, disappearing, and by the way never showing up for court,” Trump said.

This isn’t the first time the U.S. military would be deployed on the U.S.-Mexico border.

“Under President George W. Bush, a border deployment of the National Guard known as Operation Jump Start started in 2006 and lasted two years,” it has been reported. “The operation sent more than 6,000 troops to California, Arizona, New Mexico and Texas to repair secondary border fence, construct nearly 1,000 metal barriers and fly border protection agents by helicopter to intercept immigrants trying to enter illegally.”

Even former President Barack Obama also deployed a small contingent of National Guard to defend against illegal border crossings in 2010.