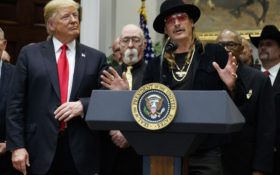 Trump signed the Orrin B. Hatch Music Modernization Act on Thursday. The bill won wide bipartisan support in the House and Senate and is backed by the music industry. It’s named after the retiring Utah senator, who is also a musician.

Also joining the president were Mike Love of the Beach Boys, singer Sam Moore and the Christian group MercyMe.

The legislation creates a new independent entity that will license songs to companies that play music online.

The nonprofit collective will then pay songwriters, including those who wrote pre-1970s classics before music copyrights protected their work.