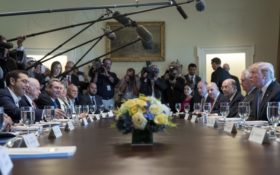 President Donald Trump hailed Greece’s economic recovery on Tuesday as he welcomed the country’s prime minister to the White House, a meeting that provided the two leaders with an opportunity to set aside tough rhetoric from the past.

Trump, joining with Prime Minister Alexis Tsipras in the Oval Office, said Greece had “gone through a lot” during its extended period of economic hardships but vowed that the U.S. would stand with the country in the long-term.

“They’re doing a terrific job of coming back,” Trump said. “They will be back. We’re working with them on many different things.”

Greece has relied on international bailouts since 2010 to address hardships during the recent economic recession. In exchange, the country imposed painful spending cuts, tax hikes and reforms. Eurozone officials have said Greece and its European creditors are on a good path to completing bailout talks with a view to a “clean exit” from strict fiscal supervision.

During his visit, Tsipras emphasized the partnership between the two nations and he expected a “very fruitful discussion” with Trump. He said the two countries share the “values of freedom and democracy” and later described the talks as an “opportunity to enhance our strategic partnership.”

Said Trump: “We’ll be talking about additional ways where Greece will help us and we will help Greece.”

For Tsipras, the encounter provided him with a chance to move past his stinging statement about Trump during the 2016 presidential campaign, when the left-leaning Greek leader warned that Trump represented an “evil” set of ideas.

During his visit, Tsipras emphasized the partnership between the two nations and he expected a “very fruitful discussion” with Trump. He said the two countries share the “values of freedom and democracy” and later described the talks as an “opportunity to enhance our strategic partnership.”

Tsipras was not always complimentary of the U.S. president. In Athens in 2016, he said: “Tell me who of you would believe a few months ago that in the U.S. today, the front-runner on behalf of the Republicans for the nomination of the candidate President would be Mr. Trump?” the leftist leader asked.

“And of course what this nomination marks, the ideas it represents, the appeal it reaches, and the threat to become even President — I hope we will not face this evil,” Tsipras said at the time.

Greece is emerging from an eight-year financial crisis, with the International Monetary Fund, the European Union and others predicting a return to growth this year. With large privatization items still on the government agenda and a gradual return to bond markets planned over the next year, Greece is keen to attract U.S. investors.

Trump tweeted in the fall of 2012 that Greece should get out of the euro and go back to its own currency, adding, “they are just wasting time.”

The Obama administration was a valuable ally to Greece when hardliners among European bailout lenders insisted in strict austerity measures and backed a possible Greek exit from the eurozone. Washington favored the IMF view that Athens needed substantial bailout debt relief to achieve a sustainable recovery.

Tsipras was seeking continuity of that support and has been careful since the 2016 U.S. election to avoid criticism of Trump in his public remarks.

Amid growing tensions between NATO ally Turkey and the United States, Greece is hoping to see the U.S. retain its influence in the region, concerned about the effect of mounting euro-skepticism on countries in the region.

Greece also wants continued backing for its plans to act as an energy transit hub, including an ambitious undersea natural gas pipeline project that would join Greece, Cyprus, and Israel.