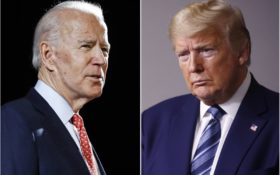 As far as President Donald Trump is concerned, there’s one person who can defeat Joe Biden…and it’s Joe Biden.

The president wants to give the American people the chance to see Biden as much as possible by challenging Biden to more debates—and the Democrats are running scared.

He wants to take Biden apart on stage at least four times.

And he wants to make sure the debates aren’t buried in the ratings, like the Democratic primary debates were, by running at the same time as NFL games.

Right now, the Commission on Presidential Debates has scheduled only three debates this fall: September 29 in Indiana, October 15 in Michigan, and October 22 in Tennessee. Vice President Pence will also debate Biden’s running mate on October 7.

That’s not enough for Trump, but so far, the Biden campaign hasn’t agreed to anything.

And experts say he won’t, if he knows that’s good for him.

Does anybody ACTUALLY believe Joe Biden will get up on stage to debate President Trump?

Biden’s Deputy Campaign Manager Kate Bedingfield wouldn’t commit to anything—but she tried to give her candidate all the cover she could.

But she warned that all bets were off if Trump doesn’t try to “intimidate” the commission into “changes from past practices.”

Biden’s handlers accuse Trump of unfair bias—by wanting to have at least one moderator who doesn’t hate his guts.

Trump says that Biden’s only prayer is to get the commission to stack the debates against him by picking a panel of anti-Trump personalities, like they did four years ago, when CNN’s Anderson Cooper accused him of sexual abuse.

“The so-called Commission on Presidential Debates is stacked with Trump Haters & Never Trumpers,” the president tweeted.

Bias or no bias, President Trump is “going to eat him alive,” predicted podcaster Joe Rogan.

That’s why the Democratic Party wants to keep its candidate out of the spotlight as long as humanly possible.

Former Virginia Gov. Terry McAuliffe admitted on a conference call earlier this month that Joe Biden is “fine in the basement,” where “two people see him a day.”

Even “a lot of Democrats will tell you, at least, privately that (Biden) does not have the mental acuity that he even had a couple of years ago,” said Joe Concha, media reporter for The Hill.

That may explain why Joe Biden’s last press conference was April 2—a whopping 82 days ago.

Even then, Biden spoke in a way that’s “not a normal way to communicate unless he’s high as f–k,” according to Rogan.

Before he went into lockdown—supposedly to protect himself from the Wuhan Flu—Biden called a Democratic voter “fat,” screamed that a woman was “a lying, dog-faced pony soldier,” and challenged yet another man to “step outside.”

It got so bad that 55 percent of voters—including one out of every three Democrats—think it’s “likely that Vice President Biden is in the early stages of dementia.”

Since then, he’s held little-seen Zoom meetings, where he’s rambled and repeated himself, stopped himself in mid-sentence to talk to the person running his teleprompter, and say that anyone who votes for Donald Trump “ain’t black.”

“Biden has not looked that great in his few video appearances,” said Zogby. “At some point the former vice president will need to be his best if he is going to win over voters.”

Luckily, Biden has the mainstream media in his corner.

“The news media on the Left has completely ignored all of these Biden speeches that clearly show some kind of cognitive decline,” said Rogan.

Biden’s “campaign continues to hide him from the American people and the press,” the GOP said. But in “those rare moments when Joe Biden does emerge from the basement remind us why he’s being kept there.”

Trump 2020 Communications Director Tim Murtaugh said, “Anyone who watches Joe Biden speak for more than a minute can tell that he is barely there.”

The commercial says “Joe Biden is slipping” and “clearly diminished.” Clips show the vexed ex-veep tripping over his words and mixing up dates as he nods off, or his unfocused eyes dash around wildly.

Trump wants everyone to see Joe Biden’s mind on full display—and that could bring Biden’s approval numbers crashing down into the basement.