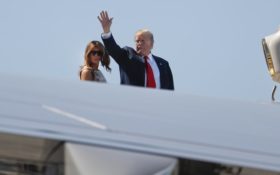 How often do you fly?

If the answer is often, you just might have contributed to building the wall along the southern border.

The Department of Homeland Security (DHS) is hoping the move to make loose change left behind on commercial flights available to help finance the U.S.-Mexico border wall that President Donald Trump has been chomping at the bit to get funded, according to NBC news.

The number of spare pennies left behind? $3 million a year.

It would come as part of $232 million that DHS is demanding from the Transportation Security Administration (TSA). The White House sees this as a back-up plan, entertaining the possibility that Congress might reject the $1.1 billion worth of funding for border operations that Trump asked for earlier this month.

TSA met its Tuesday deadline to draw up a budget plan of what costs the agency would be willing to cut to meet the amount of $232 — including the spare change left by the tens of millions of airport travelers at security screenings every year.

The budget was outlined via email and in PowerPoint presentation.

For now, it seems likely White House officials will use the funding if the numbers add up.

The Trump administration is using a no holds barred approach to ensure funding for the border crisis maligning the country, as Democrats continue to deny proposals to address the humanitarian crisis.

Since stubborn liberals won’t admit the country has a border crisis, the White House has had to come up with clever plans to obtain funding.

Tyler Houlton, the DHS spokesman, assured that “all options are on the table.”

“As part of this effort, it is our responsibility to explore fiscal mechanisms that will ensure the safety and welfare of both our workforce and the migrant population,” Houlton said.

It’s clear the Trump administration’s commitment to the issue is deadly serious.

And no doubt, voters are too.