Trump urges Congress: "Do the right thing" - The Horn News 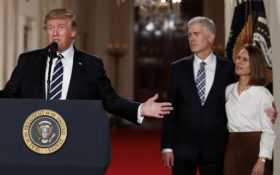 President Donald Trump urged Majority leader Mitch McConnell on Wednesday to change the rules of the Senate if necessary to swiftly push through his Supreme Court nominee, Judge Neil Gorsuch. Trump’s words immediately escalated what’s shaping up as a feverish partisan battle over the vacancy on the Supreme Court.

Trump’s endorsement of a scenario known on Capitol Hill as the “nuclear option” came the morning after he announced Gorsuch’s nomination.

“I would say, if you can, Mitch, go nuclear because that would be an absolute shame if a man of this quality was caught up in the web,” Trump said at the White House.

McConnell has not said whether he might invoke the nuclear option if minority Democrats block Gorsuch’s confirmation, as several already are threatening to do. But the Senate leader has said repeatedly that, one way or another, Gorsuch will be confirmed.

The nuclear option would mean unilaterally lowering the threshold needed to approve Gorsuch from 60 to 50 votes, so that Republicans could use their 52-vote majority to put him on the court without Democrats’ consent.

Speaking on the Senate floor Wednesday around the same time Trump made his views known, McConnell said he expects to see Democrats “giving the new nominee a fair consideration and up-or-down vote just as we did for past presidents of both parties.”

What McConnell didn’t say was that he refused last year to allow even a hearing for Merrick Garland, President Barack Obama’s pick to replace Justice Antonin Scalia. Instead, the seat remained empty for 10 months and the court operated with eight justices as McConnell maintained that only the next president should make the nomination.

Democrats remain furious over Garland’s treatment. But their divisions were already on display Wednesday even as Gorsuch made the rounds on Capitol Hill accompanied by Vice President Mike Pence, earning warm praise from McConnell and other Senate Republicans.

A handful of Democrats did announce their opposition to Gorsuch, 49, a Denver-based judge on the 10th U.S. Circuit Court of Appeals whose conservative legal philosophy is seen as similar to that of Scalia. They argued that the Ivy League-educated son of a former Reagan administration official is outside the mainstream.

“This is a stolen seat being filled by an illegitimate and extreme nominee, and I will do everything in my power to stand up against this assault on the court,” said Sen. Jeff Merkley, D-Ore.

Merkley said even before the nominee was announced that he would hold up the nomination and force Republicans to find 60 votes for confirmation, a position that Senate Minority Leader Chuck Schumer of New York has endorsed.

But other Democrats were holding off, saying Gorsuch deserved a fair hearing.

“I think that he is owed what Judge Garland never got which is a full hearing, a chance for the American people over several days to better understand his views on the Constitution and a wide range of the rights that are central to our Republic,” said Democratic Sen. Chris Coons of Delaware, a Judiciary Committee member.

The committee will aim to begin hearings on Gorsuch in about six weeks, according to a spokeswoman for the panel’s Republican chairman, Chuck Grassley of Iowa.

Schumer and other Democrats are under intense pressure from liberal groups and the party base to challenge every Trump nominee. As the nomination was announced, hundreds were protesting at Schumer’s Brooklyn home, pressuring him to vote against Cabinet picks and block Gorsuch.

A handful of other Democrats joined Merkley in immediately opposing Gorsuch. They included Massachusetts Sen. Elizabeth Warren, who said Gorsuch has sided with large companies over workers, and Ohio Sen. Sherrod Brown, who said Gorsuch’s rulings haven’t favored American workers or women’s rights. Brown and Warren are up for re-election in 2018.

Schumer is in a tough position. As liberal groups and Democratic voters angry about Trump’s election victory press him to lead the loyal opposition, he must also be mindful of 23 Democrats and two independents up for re-election in 2018, including in 10 in states won by Trump.

Some of those senators could face blowback from voters who see Democrats as obstructing Trump’s pick.

“I’m anxious to meet with Gorsuch. I’m anxious to hear his views. I’m anxious to read more about him. I will make a decision. I think he needs a vote, should have a vote,” Sen. Joe Manchin, D-W.Va., among those up for re-election, told The Associated Press on Wednesday.

Trump’s choice of Gorsuch marks perhaps the most significant decision of his young presidency, one with ramifications that could last long after he leaves office. Gorsuch would restore the court to the conservative tilt it held with Scalia on the bench. But he is not expected to call into question high-profile rulings on abortion, gay marriage and other issues in which the court has been divided 5-4 in recent years.

For some Republicans, the prospect of filling one or more Supreme Court seats over the next four years has helped ease their concerns about Trump’s experience and temperament. Three justices are in their late 70s and early 80s, and a retirement would offer Trump the opportunity to cement conservative dominance of the court for many years.