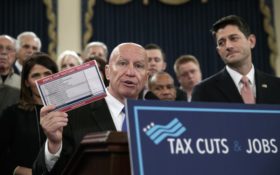 House Republicans on Thursday unveiled a tax cut plan that would slash the corporate rate and lower the personal taxes of most Americans but also limit a deduction for homeowners, as President Donald Trump and the GOP seek to deliver on the first tax revamp in three decades.

Trump promised in a statement that his administration “will work tirelessly to make good on our promise to the working people who built our nation and deliver historic tax cuts and reforms — the rocket fuel our economy needs to soar higher than ever before.”

Middle-income families would pay less, thanks to doubling of the standard deduction and an increase in the child tax credit.

Wealthy Americans would benefit from the repeal of the alternative minimum tax and phase-out of the estate tax. Republicans calculate that a family of four with a median $60,000 income would receive a tax cut of almost $1,200.

However, many two-income, upper-middle class families would pay more after being bumped into a higher tax bracket.

“Today is the day. We are introducing legislation that will cut your taxes & make the entire system more simple. This will be a game-changer,” Speaker Paul Ryan, R-Wis., said on Twitter.

The proposal would leave intact the existing rules on 401(k) retirement accounts and the ability of Americans to contribute up to $18,000 into the accounts tax-deferred. But the plan would limit the deduction for mortgage interest to new home loans of $500,000 or less.

The plan also would limit the deductibility of local property taxes to $10,000 and eliminate the deduction for state income taxes, which has generated significant opposition from Republicans in high-tax states such as New York and New Jersey.

The tax-writing Ways and Means Committee will work on finalizing the proposal next week. The proposal caused anxiety for some House Republicans and drew criticism from a few in the Senate, which is intent on writing its own bill.

Rep. Lee Zeldin, R-N.Y., announced his opposition: “We need to fix this.”

The plan would shrink the number of tax brackets from seven to three, with respective rates of 12 percent, 25 percent, 35 percent and 39.6 percent. The tax system would be simplified, and most people would be able to file their returns on a postcard-sized form.

The plan would slash the corporate tax rate from 35 percent to 20 percent, a demand by Trump. It also would repeal the inheritance taxes on multimillion-dollar estates, a big break for the wealthy.

“There are a lot of people still in our conference who are anxious to see exactly how this plays out with growth in the economy, what the long term deficit and debt situation turns out to be,” said Rep. Steve Womack, R-Ark.

The legislation is a longstanding goal for Capitol Hill Republicans who see a once-in-a-generation opportunity to clean up an inefficient, loophole-cluttered tax code.

The plan calls for nearly doubling the standard deduction used by most average Americans to $12,000 for individuals and $24,000 for families, and increasing the per-child tax credit.

The emerging plan would retain the Clinton-era 39.6 percent income tax rate for the wealthiest earners. But for that highest bracket, the tax writers raised the minimum level of income to $1 million for couples or families from the current $470,000 — a change that would reduce tax revenue.

Reaction among outside groups was inherently well-recieved. Tax-cut activist Grover Norquist of Americans for Tax reform said the measure was “long overdue” and offered “great news for taxpayers and those left behind by eight years of slow growth under Obama.”

Republicans reactions are overwhelmingly please, Representative Kevin McCarthy, Republican of California, said of his colleagues, “It looks very positive, these people are excited.” He added: “this is why they came to Congress.”