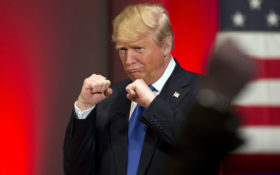 Democrats have announced an effort to deprive the U.S. military of funding unless President Donald Trump gives them what they want.

But Trump isn’t having any of that nonsense. He just unleashed a firestorm on Democrats via social media — and what he said has Trump voters nodding in agreement.

Trump said Thursday that he is opposed to bail out Puerto Rico of its $70 billion debt load it acquired thanks to ObamaCare and spending mismanagement… and he won’t let Democrats hold our military ransom to do so.

The Democrats want to shut government if we don't bail out Puerto Rico and give billions to their insurance companies for OCare failure. NO!

Trump was referring to negotiations over a huge government-wide spending bill that includes elements including abortion-related issues and Obama-era regulations on regulating businesses.

Puerto Rico Gov. Ricardo Rossello traveled to Washington D.C. to lobby legislators for relief from a decade-long economic crisis that is blamed on previous Democratic administrations in the territory that borrowed billions of dollars to cover budget deficits.

Rossello repeated requests that Puerto Rico receive the same amount of Medicaid funding that U.S. states do, even though Puerto Rico residents pay almost zero federal taxes. It currently receives lower Medicaid and Medicare reimbursements compared with U.S. states proportionate to what it brings in. Nearly half of the island’s 3.4 million inhabitants rely on Medicaid.

In other words, Democrats want Trump to sign a government welfare check for the insurance companies — and won’t fund the military if he disagrees.

Democrats are trying to bail out insurance companies from disastrous #ObamaCare, and Puerto Rico with your tax dollars. Sad!

I promise to rebuild our military and secure our border. Democrats want to shut down the government. Politics!

Comment, “I stand with Trump!” below if you support our president, NOT welfare