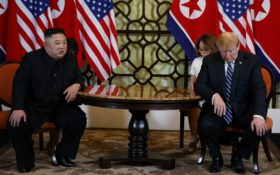 No deal, Trump said — and he walked away from the negotiation table.

Trump said he breakdown on North Korea’s insistence that all the sanctions imposed on Pyongyang must be lifted — without the North committing to eliminate its nuclear arsenal.

Trump was having none of it.

“Basically, they wanted the sanctions lifted in their entirety, and we couldn’t do that,” Trump told reporters. So he walked away from the table.

The move left liberal pundits stunned —  but it may be Trump’s finest political move yet.

During deliberation, Kim said that he was willing to remove North Korean armaments in order to achieve peace.

Kim appeared willing to close his country’s main nuclear facility, the Yongbyon Nuclear Scientific Research Center, if the sanctions were lifted. But Trump and Secretary of State Mike Pompeo know that would still leave Kim with missiles, nuclear warheads and weapon systems in other hidden locations.

Trump turned his back on a deal, which would’ve greatly favored North Korea and left the U.S. with empty promises. Trump said during the 2016 election he would do away with deals that would not favor America — and he kept that promise by walking out on Wednesday.

It was an embarrassing result for Kim, who has faced increasing pressure to denuclearize North Korea. The standoff came on the precipice of a solution. An agreement document was drafted to be signed, but Kim began to push for more.

“Sometimes you have to walk,” Trump explained at a closing news conference after the summit was abruptly cut short. “I’d much rather do it right than do it fast. We’re in position to do something very special.”

This meeting was supposed to be Kim’s grand entrance into normalization. To be taken seriously as a world leader capable of compromise. Hopes were high as his train rolled into Hanoi earlier in the week. Instead, deadlock filled the Vietnam air as both leaders parted ways.

Trump insisted his relations with Kim remained warm, but he did not commit to having a third summit with the North Korean leader, saying a possible next meeting “may not be for a long time.”

White House aides stressed that Trump stood strong, and some observers talked about the 1987 Reykjavík summit between Ronald Reagan and the Soviet Union’s Mikhail Gorbachev — a meeting over nuclear weapons that ended without a deal but laid the groundwork for a future agreement.