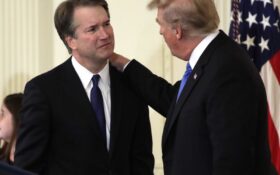 Justice Brett Kavanaugh is up next on former President Donald Trump’s hit list.

The SCOTUS judge is the latest to go from friend to foe.

This is according to newly leaked excerpts from the forthcoming book, “Landslide: The Final Days of the Trump Presidency,” by Michael Wolff.

Trump’s harsh evaluations — which expressed disappointment in Kavanaugh — quickly spread around the media like wildfire.

“I am very disappointed in him,” he purportedly told Wolff, “In his rulings.”

The comments, released to the public ahead of the book’s release July 27, seem to be the first time the former president has discussed his dismay with the conservative judge.

I can’t even believe what’s happening. I’m very disappointed in Kavanaugh. I just told you something I haven’t told a lot of people. In retrospect, he just hasn’t had the courage you need to be a great justice. I’m basing this on more than just the election.

And from Trump’s words, it seems as though he may have experienced some regret around sticking with Kavanaugh during his confirmation process — which drew the attention of the nation over the unproven sexual assault accusations by Christine Blasey Ford.

“Practically every senator called me,” Trump claimed. “They said, ‘Cut him loose, sir, cut him loose. He’s killing us.’”

Of course, Trump stuck by him, Kavanaugh was confirmed and the rest was history.

The way Trump sees it, he saved Kavanaugh’s life.

I had plenty of time to pick somebody else … I went through that thing and fought like hell for Kavanaugh — and I saved his life, and I saved his career. At great expense to myself … okay? I fought for that guy and kept him.

Many critics have pointed out that they believe Trump’s disappointment stems from the Supreme Court decision to toss out a Texas election lawsuit aiming to get rid of the electoral results in swing states. He, along with Justice Amy Coney Barrett, voted against the lawsuit as well.

“I saved his life. He wouldn’t even be in a law firm. Who would have had him? Nobody. Totally disgraced. Only I saved him.”

Trump isn’t the first conservative to express disappointment in Kavanaugh, or the most recently appointed Barrett for that matter.

Conservative pundit Ben Shapiro has decried the two as “incrementalists” rather than major beacons of change on the bench.

In other words, don’t get your hopes up that they’ll stand up for the major conservative principles.

“So far, we have seen little from either Barrett or Kavanaugh to justify conservatives’ high hopes for them.”

So perhaps Trump sees it very similarly. He told Wolff that he’s disappointed to a certain degree with all the judges he’s appointed, including Justice Neil Gorsuch.

But he reportedly has a special amount of contempt for Kavanaugh.