Trump to meet with crew, passengers of deadly Southwest flight - The Horn News 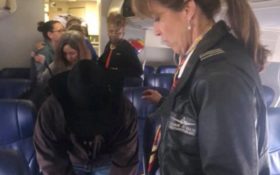 President Donald Trump is meeting the crew and passengers of a Southwest Airlines flight forced into an emergency landing in Philadelphia after an engine exploded, damaging the fuselage and critically injuring a passenger who was partially sucked out of a window broken by shrapnel.

The White House says Trump wants to thank the crew for safely landing the damaged airplane. He also wants to meet passengers who assisted other travelers.

Capt. Tammie Jo Shults and First Officer Darren Ellisor, the pilots, are expected to attend, along with three flight attendants and five passengers.

Southwest Airlines Flight 1380 was headed from New York to Dallas last month when an engine on the Boeing 737 exploded at 30,000 feet.

Jennifer Riordan, a bank executive from New Mexico, died from her injuries.