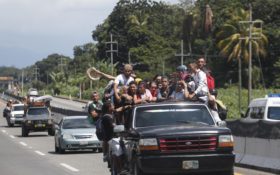 President Donald Trump said Monday the U.S. would begin “cutting off, or substantially reducing” aid to three Central American nations as citizens of those countries continue heading to the U.S. southern border in a massive migrant caravan.

Trump tweeted: “Guatemala, Honduras and El Salvador were not able to do the job of stopping people from leaving their country and coming illegally to the U.S.”

The three countries received a combined more than $500 million in funding from the U.S. in fiscal year 2017, though it was not immediately clear how much Trump is seeking to cut.

On Monday morning Trump posted a trio of tweets threatening to cut aids to the three countries if they did not stop their citizens from fleeing to the U.S.

Sadly, it looks like Mexico’s Police and Military are unable to stop the Caravan heading to the Southern Border of the United States. Criminals and unknown Middle Easterners are mixed in. I have alerted Border Patrol and Military that this is a National Emergy. Must change laws!

Every time you see a Caravan, or people illegally coming, or attempting to come, into our Country illegally, think of and blame the Democrats for not giving us the votes to change our pathetic Immigration Laws! Remember the Midterms! So unfair to those who come in legally.

Guatemala, Honduras and El Salvador were not able to do the job of stopping people from leaving their country and coming illegally to the U.S. We will now begin cutting off, or substantially reducing, the massive foreign aid routinely given to them.

Thousands of Central American migrants gathered in a southern Mexican town on Monday preparing to embark on the arduous 2,000-mile walk to the U.S. border even as Trump rained more threats on their governments.

The president, and his fellow Republicans have sought to elevate the issue of migrants attempting to cross the border.

On a three-day campaign swing to Western states last week, Trump raised alarms over thousands of migrants traveling through Mexico to the U.S. and threatened to seal off the U.S.-Mexico border if they weren’t stopped.

The president who has held a tough approach to illegal immigrant since taking office, wrote on Twitter, that he has alerted “Border Patrol and Military that this is a National Emergency.”