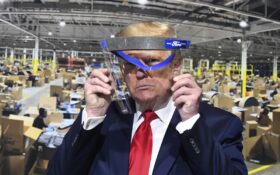 This week leading up to the visit, he tangled horns with a few of his rivals in the state.

The scheduled factory visit was an acknowledgment of the car company’s switch to ventilator production. Ford’s ventilators have helped hospitals fight the Wuhan flu in a state where more than 50,000 Americans are infected.

The state has sent all ballots to all registered voters –– and Trump is unhappy. Republicans have warned that fraud can overwhelm mail-in voting.

Trump threatened to withhold money from the state, claiming the move came from a “rogue Secretary of State.”

“Michigan sends absentee ballot applications to 7.7 million people ahead of Primaries and the General Election,” Trump wrote on Twitter. “This was done illegally and without authorization by a rogue Secretary of State. I will ask to hold up funding to Michigan if they want to go down this Voter Fraud path!”

Michigan sends absentee ballot applications to 7.7 million people ahead of Primaries and the General Election. This was done illegally and without authorization by a rogue Secretary of State. I will ask to hold up funding to Michigan if they want to go down this Voter Fraud path!

“Threatening to take money away from a state that is hurting as bad as we are right now is just scary and I think something that is unacceptable,” she told CBS in an interview.

But the clash didn’t stop there.

Trump once again came under fire for not wearing a mask during his tour of the Ford plant in Ypsilanti, Michigan.

The move caught the eye of Michigan’s Attorney General Dana Nessel, who called Trump a “petulant child” for refusing to wear a mask in public.

“This is not a joke,” Nessel told CNN. “He’s conveying the worst possible message to people who cannot afford to be on the receiving end of terrible misinformation.”

Trump fired back hard, labeling the lesser-known state politician as a “Do nothing A.G.”

Do nothing A.G. of the Great State of Michigan, Dana Nessel, should not be taking her anger and stupidity out on Ford Motor – they might get upset with you and leave the state, like so many other companies have – until I came along and brought business back to Michigan. JOBS!

Nessel hinted at an investigation of Ford executives for allowing Trump to tour the assembly floor.

Company officials released a statement confirming that although Trump was advised to wear a mask, he refused.