Trump teaming up with... Clarence Thomas!? - The Horn News 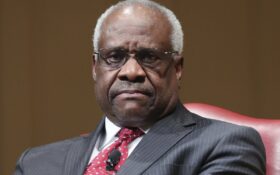 When Facebook officials upheld their ban on former President Donald Trump, they didn’t anticipate this.

Trump is about to unveil a “groundbreaking legal theory,” according to one expert.

And he has an ally: Supreme Court Justice Clarence Thomas.

Author Vivek Ramaswamy told BizPacReview that Trump has “facts” on his side heading towards a High Court meetup — where Democrats can’t influence companies and where he has a conservative majority.

“Facts are on his side,” Ramaswamy explained.

“They’re [Tech giants are] effectively doing the bidding of Democrats in Congress who have threatened them with regulation and reprisal if they don’t go out and censor content that they, as Democrats, don’t want to see and they give them Section 230 immunity and go out and do it.

“I think Trump should take it all the way to the real U.S. Supreme Court.”

Ramaswamy is arguing this at a time when SCOTUS Justice Thomas has been surprisingly vocal about hearing Trump’s case against tech giants.

“Clarence Thomas threw down the gauntlet and said that he was interested in hearing the case in an opinion he wrote recently,” Ramaswamy said.

In April, Thomas defended the ex-president when the SCOTUS dismissed a similar tech case involving Trump’s ability to block social media followers. He has been a frequent critic of the lawless nature of tech companies and their abilities to silence anyone at will.

And he’s hungry to take a case on to defend Trump.

Justice Clarence Thomas is always worth reading closely. Today is no exception. Read his entire concurrence today (starts at p. 9 of this PDF: https://t.co/41xQzdttGu) and then note the reference here to Amazon… We need more legal thinkers like Justice Thomas. pic.twitter.com/mS1qipAJmZ

For now, Trump has taken to posting on his blog-style platform where remains engaged with the pressing topics in President Joe Biden’s administration, Washington, D.C. at large, and more.

Undoubtedly, Trump’s social media influence has shrunk since his ban. Yet, the loss he suffered at Facebook and Twitter could end up being a major victory for Americans should he make his case before the highest court in the land.

Could Justice Thomas be the one person to help get Trump back online?