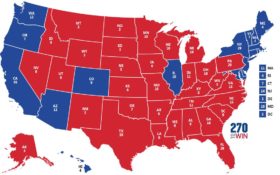 But people on “Team Trump” are making a bold prediction.

“The more bad things happen in the country, it just solidifies support for Trump,” said Phillip Stephens, the GOP chairman in a swing district in North Carolina, told Politico.

“We’re calling him ‘Teflon Trump.’ Nothing’s going to stick, because if anything, it’s getting more exciting than it was in 2016,” Stephens said.

Stephens isn’t alone. According to the Politico report, Republican leaders across the country say things are swinging back in Trump’s favor at just the right time.

“Things are coming right back where we want them … That focus on the economy and on re-opening and bringing America back is resonating with people,” Wisconsin GOP chairman Andrew Hitt said.

Kyle Hupfer, Indiana’s Republican Party chairman, said he’s “way more optimistic” at this point in 2020 than he was during the 2016 presidential election.

Trump himself has expressed confidence on social media, touting his high approval ratings among Republicans and hinting that internal polling numbers show the “Silent Majority” of voters are eager to cast a ballot for the incumbent in November.

THE SILENT MAJORITY IS STRONGER THAN EVER!!!

Meanwhile, Trump’s enormous campaign war chest is starting to be put to use in critical swing states.

Trump campaign manager Brad Parscale liked his advertising campaign strategy to the building of the Star Wars “Death Star” — and in April the campaign finally began expending its vast resources.

Trump has a huge amount of money, allowing him to reach persuadable voters on their televisions, phones, and computers. He reported more than $250 million in the bank at the end of April combined with the Republican National Committee and joint entities.

Trump campaign officials say the presidential race is only just starting to emerge from a coronavirus-induced freeze that dominated public attention, and they’ve spent only a fraction of their record-breaking war chest. They said they are seeing more public responsiveness to their anti-Biden message by the day, as more voters tune into the general election matchup.

“A lot of Americans know of Joe Biden but not very many know about Joe Biden,” said Trump campaign communications director Tim Murtaugh. “Right now, in most voters’ minds, he is essentially the generic Democrat. We’re going to change that.”

Democrats acknowledge that Trump has a well-funded political operation that should not be taken lightly, yet they are generally pleased with the state of the race.

Biden announced on Monday that he raised $80.8 million last month alone working with the Democratic National Committee. In addition to the focus on online donations, his campaign has benefited from the broad surge of donations to progressive groups during the recent period of civil unrest.

Meanwhile, the advertising spending data shows that Trump has focused the vast majority of his paid media campaign on six states over the last seven weeks: Arizona, Florida, Michigan, North Carolina, Pennsylvania, and Wisconsin. Trump’s team has periodically raised the possibility of winning Democratic-leaning states like Minnesota, New Mexico, and even Oregon, but the advertising numbers tell the story of a campaign decidedly on the defensive.

So far, at least, Trump’s campaign is only spending money in states he won four years ago.

Florida tops the list. The president spent almost $5.6 million on television and online advertising in Florida between April 26 and June 6, according to data shared with the AP. Over the same period, he spent $3.7 million in Wisconsin, $3.1 million in Pennsylvania, $2.3 million in North Carolina, $1.7 million in Michigan and $1.1 million in Arizona. The campaign also spent another $6.3 million on national cable advertising.

While advertising is significant, not everyone is convinced a Trump landslide is coming.

Former Wisconsin Gov. Scott Walker suggested that Trump’s fate is tied more directly to the health of the nation.

“When you get stability both in the economy and just overall stability, you’re going to start to see the president’s numbers get closer to where they were a couple months ago, which was still very tight,” Walker said. “I don’t think anything is going to be a slam dunk.”