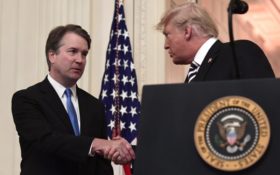 Despite a contentious confirmation hearing last year, Supreme Court Justice Brett Kavanaugh has been sitting comfortably at the highest court in the nation for months.

His most notable accuser, Christina Blasey Ford, became a media sensation overnight during the confirmation hearing. She received hundreds of thousands of dollars in donations.

The mainstream media fell head over heels for her story while Kavanaugh and the Trump team stayed silent — they kept largely quiet throughout it all.

It turns out, they’d been sitting on dirt about Blasey Ford.

The explosive new information is being revealed in a tell-all book, “Justice on Trial: The Kavanaugh Confirmation and the Future of the Supreme Court.”

The book talks about how Kavanaugh unearthed a picture of his calendar early in the process, which showed that he hadn’t had anything planned the night of Blasey Ford’s accusation.

But it wasn’t so simple for Trump officials. They allegedly feared that speaking out against the accusers would be dismissed by the media as a form of “victim shaming.”

It could have further damaged Kavanaugh’s chances.

After all, the mainstream media did everything it could to find any accuser who would come forward.,. no matter how credible they were.

Much of the book, co-authored in part by a team of Fox News contributors, ” is dedicated to exposing “the media’s irrational personal dislike of Kavanaugh.”

In the end, Kavanaugh was confirmed.

The calendar helped him win over swing Republican senator votes.