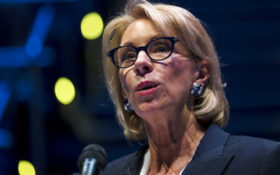 Education Secretary Betsy DeVos on Friday proposed a major overhaul to the way colleges and universities handle sexual misconduct complaints, adding protections for students accused of assault and harassment and narrowing which cases schools would be required to investigate.

Under the plan, schools would have to investigate complaints only if the alleged incidents occurred on campus or other areas overseen by the school, and only if they were reported to certain campus officials with the authority to take action.

The Education Department said the proposal ensures fairness for students on both sides of accusations, while offering schools greater flexibility to help victims who don’t want to file formal complaints that could trigger an investigation.

“Throughout this process, my focus was, is, and always will be on ensuring that every student can learn in a safe and nurturing environment,” DeVos said in a statement. “That starts with having clear policies and fair processes that every student can rely on. Every survivor of sexual violence must be taken seriously, and every student accused of sexual misconduct must know that guilt is not predetermined.”

DeVos previously said the existing rules pressure schools to take heavy action against students accused of misconduct without giving them a fair chance to defend themselves.

Her new proposal adds several provisions meant to protect accused students. They would be allowed to review and respond to all evidence collected by the school, for example, and have a presumption of innocence throughout the disciplinary process.

They could cross-examine their accusers, although it would be done indirectly through a representative to avoid personal confrontation.

Opponents say the proposal would deter victims from reporting assaults, and allow schools to shirk responsibility when they do receive complaints.

But supporters say the new rules do a better job providing equal treatment to all students.

“By taking the rights of both complainants and accused students seriously, these proposed regulations make important strides toward ensuring that complaints of sexual misconduct will be neither ignored nor prejudged,” said Samantha Harris, vice president for procedural advocacy at the Foundation for Individual Rights in Education.

The proposal would effectively tell schools how to apply the 1972 law known as Title IX, which bars discrimination based on sex in schools that receive federal dollars.

Schools for years have relied on a series of guidance letters issued by the Obama administration instructing them how to respond to complaints of sexual misconduct. Colleges were required to investigate all student complaints, on campus or off, and any misstep could put them under federal investigation.

Advocacy groups for victims say the Obama rules forced schools to stop sweeping the issue under the rug, while advocates for accused students say it tipped the scales in favor of accusers. Some college leaders complained that the rules were too complex and could be overly burdensome.

DeVos rescinded an important guidance letter in September 2017, declaring that “the era of ‘rule by letter'” was over. In its place, she issued the 150-page proposal released Friday.

Among other changes, it narrows what constitutes sexual harassment. While the 2011 guidance defined it as “unwelcome conduct of a sexual nature,” the new proposal defines it as unwelcome sexual conduct that’s so severe “it effectively denies a person equal access to the school’s education program or activity.”

Even if victims don’t file a formal complaint, the proposal encourages schools to offer a range of measures to help them continue their studies, including counseling, class schedule changes, dorm room reassignments and no-contact orders for those accused of harming them.

It has yet to be seen whether schools would change policies in response to the rules. A statement from the Association of Public and Land-grant Universities says it expects schools to “far exceed” the minimum that’s required in Title IX rules.

Before the rules can be finalized, the Education Department will gather public input from the public.

The Associated Pree contributed to this article