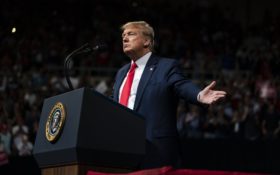 It may be time for the United Nations to leave New York City and find a new home.

Because the UN … headquartered in the same city targeted by the 9/11 terror attacks … has proven again that it cares more about protecting terrorists than American lives.

And this time, President Donald Trump is in the UN’s crosshairs.

A report submitted this week to the UN Human Rights Council claimed that Trump violated international law when he ordered a drone strike that killed Iranian General Qassem Soleimani in January.

The UN claims it wasn’t convinced that Soleimani was planning imminent attacks on America — and that by killing Soleimani in Iraq, Trump violated that country’s national sovereignty.

Of course, Soleimani was the head of Iran’s notorious Quds Force … and it’s nearly universally accepted that the Quds Force supports anti-America terror groups all throughout the Middle East.

In fact, the Quds Force itself was designated as a terrorist organization in 2007.

Fortunately, the UN has limited jurisdiction and would likely only be able to issue a condemnation aimed at Trump and the United States.

But Iran officials want to go even further. In fact, Iran tried to issue an international arrest warrant for Trump, but global law enforcement agency Interpol refused to comply.

The UN has a long history of insulting America, even as diplomats from around the world fight to get coveted UN appointments so they can live for years on American soil.

But this time, by defending a terrorist, the UN has gone way too far. And it’s a slight that the American people shouldn’t forget.