Trump takes off the gloves, hits DeSantis in explosive statement - The Horn News 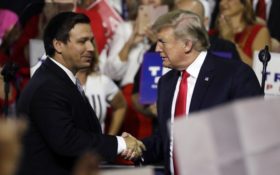 Trump warned that he’ll “handle” DeSantis like he “handles all things.”

Trump said in an interview Monday that his help in the 2018 Florida gubernatorial race was essential for DeSantis’ vicotyr over disgraced Democratic candidate Andrew Gillium — and he expects loyalty in return.

With Trump’s endorsement, DeSantis ended “up beating Gillium. Most people thought he couldn’t do that, but I did,” Trump told Real America’s Voice.

“I got him elected, pure and simple,” the 45th president claimed.

He said DeSantis victory was largely because of Trump’s backing. “And there was no reason to go wild about endorsing him.”

If DeSantis does run, Trump had a warning for the Florida governor — the first real shot in the highly anticipated 2024 campaign between the two top Republican leaders.

“So, now I hear he might want to run against me,” Trump said. “If so, we’ll handle that the way I handle things.”

Trump today on Desantis: “I got him elected, pure and simple. And there was no reason to go wild about endorsing him .. So, now I hear he might want to run against me. So, we’ll handle that the way I handle things.” pic.twitter.com/rBBYyUtnNW

The hard-charging governor has won admiration from many Republican voters nationwide by championing hard-line conservative policies on far-Left “woke” issues — among them race, gender, and illegal immigration.

While DeSantis is known for embracing Trump’s brash leadership style and even his mannerisms, allies suggest the Harvard-educated former military attorney is more deft at navigating delicate political issues than the former president is.

“I will say that, overall, Gov. DeSantis has done a good job as governor and Florida is on a roll,” Bush told The Associated Press.

DeSantis associates privately believe he will finalize his 2024 decision by the end of March, although a public announcement may not come until early summer.

He is eyeing an aggressive conservative policy agenda over the coming months to strengthen his prospective Republican candidacy.

Trump formerly declared he was running for president again in November 2022, but has made relatively few moves since the announcement.