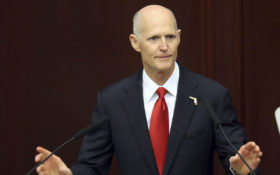 Calling Washington “horribly dysfunctional,” Florida Gov. Rick Scott is challenging U.S. Sen. Bill Nelson in an election that could be one of the most expensive and highly-watched races in the nation.

The Republican governor was expected to criticize “career politicians” and call for term limits for members of Congress while formally announcing his campaign on Monday.

“I admit that Washington is horribly dysfunctional,” said Scott in scripted remarks made available ahead of his announcement in Orlando.

Sponsored: We should convert these “hacking” ones to questions.

“Washington is full of old thinking. Washington is tired. And the truth is, both political parties share some of the blame. They’ve tried a lot of things – it just didn’t work. But I will not accept the idea that we can’t change Washington.”

Scott is a multi-millionaire businessman and was first elected governor in 2010. He campaigned as part of the tea party movement and called for massive budget and tax cuts, but was forced to scale back his plans amid opposition from the GOP-controlled Legislature.

Scott’s record on gun laws earned him an A+ rating from the National Rifle Association before the killings of 17 people at a Florida high school this year. Ultimately, Scott signed Florida’s new law raising the age limit to purchase rifles to 21 and creating a new process enabling law-enforcement to seize guns from someone who is considered a danger.

Scott took aim at Nelson meanwhile, contending the Democrat has “done nothing” in the Senate on high-profile issues such as gun violence.

Scott is leaving office due to term limits, and had been urged by President Donald Trump to challenge Nelson, Florida’s only statewide-elected Democrat.

In September, Trump urged Scott to seek the seat telling reporters, “I hope this man right here, Rick Scott, runs for the Senate.”