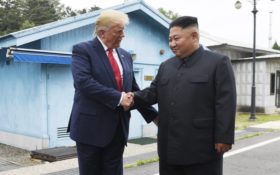 It sure looked historic: President Donald Trump and North Korean leader Kim Jong Un strode toward each other Sunday from opposite sides of a strip of land that marks one of the world’s most dangerous places. They shook hands and then Trump stepped over the concrete slab that marks the borderline between the Koreas, becoming the first U.S. president to set foot in North Korean territory.

With a single tweet inviting Kim to the border, Trump on Saturday overshadowed the summit in Japan of the leaders of the Group of 20 major economies he’d come to Asia for — and surprised the small army of Democrats jockeying to replace him in next year’s presidential election.

The world’s attention Sunday was suddenly riveted on the Demilitarized Zone that separates the rival Koreas, waiting to see if Kim would accept the invitation.

The feeling that the handshake and brief march by Trump and Kim into the North could be part of something special is linked in part to just how far North Korea and the United States have come to get here.

The Korean Peninsula was split at the end of World War II into a Soviet-controlled north and U.S.-backed South.

Then, after the bloody 1950-53 Korean War, it was divided permanently along the Demilitarized Zone, with a U.S.-led U.N. Command controlling the southern side of the border area.

Since then, the area has been highly tense and dangerous. There have been ax killings, U.S. bomber fly-bys, and desperate defections — and that’s just at the border.

Since the early 1990s, Washington and Pyongyang have been locked in confrontation as the communist North has steadily, through famine, leadership changes and crushing poverty, built its nuclear bomb program.

While it’s open to debate if Sunday’s meeting will be ultimately transforming, overall there has certainly been a sea change in the relationship between Trump and Kim — something Trump regularly mentions.

There’s also hope that even if this was mostly for the cameras, it can still push forward the diplomacy and help Kim build momentum domestically for stronger engagement — and possible disarmament.

The Kim-Trump summits have been breakthroughs in relations, “but they also revealed the limits of personality-driven diplomacy when it’s not backed up by working-level talks held on a regular basis,” according to Suzanne DiMaggio, an analyst at the Carnegie Endowment for International Peace think tank.

What’s needed now, she wrote earlier this month, is “serious diplomacy to manage the uncertainties ahead and resolve a range of difficult issues.”