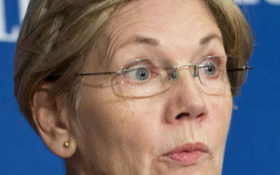 Sen. Elizabeth Warren, D-Mass., is climbing the polls heading into the 2020 Democratic primary. No doubt, President Donald Trump has noticed.

On Wednesday, Trump used an ABC News interview to set a clever political trap for his opponents — and Warren immediately fell for it.

During the interview, Trump said he was willing to listen to a foreign intelligence if they had damaging information on one of his political opponent.

“I think I’d want to hear it. … I think you might want to listen. There isn’t anything wrong with listening,” Trump told ABC’s George Stephanopoulos. The president added that he would not necessarily contact the FBI if such an approach was made.

“In many ways, that was a genius setup because the media mob will fall right into his trap. They’ll be breathlessly spewing fake, phony outrage over a nonstory for days,” Hannity said in his Wednesday night monologue.

Right on schedule, Warren was one of the first to fall for the trap.

“The Mueller Report made it clear: A foreign government attacked our 2016 elections to support Trump, Trump welcomed that help, and Trump obstructed the investigation. Now, he said he’d do it all over again. It’s time to impeach Donald Trump,” she tweeted an hour later.

According to Hannity, Warren had fallen for the bait.

“Listening is much different than, let’s see, lying, spying, and paying for Russian lies and spreading it through the media by ‘Deep State’ operatives and then using it as a basis for a FISA warrant,” Hannity countered.

By making the comments, Hannity explained, the president had forced his political opponents to answer for letting former Secretary of State Hillary Clinton off the hook.

“Why are they not outraged about Hillary paying for Russian lies? Disinformation? [Former FBI Director James] Comey generously using the unverifiable data from Russia to spy on the Trump campaign and get a FISA warrant?” the Fox News star asked.

“This will all get another round of fake, phony, moral selective outrage over that interview. But it’s a perfect setup!” he continued. “Because if they are outraged about that, and how can you not be outraged over what I just said?”

Hannity said Warren and her media pal’s response is proof they aren’t trustworthy.

“They are worried about believing… but only if it bludgeons Trump.”