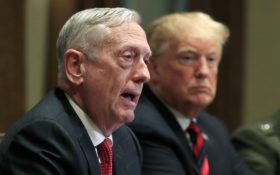 Former Secretary of Defense Jim Mattis on Wednesday denounced President Donald Trump in a harsh rebuke and said his former boss was setting up a “false conflict” between the military and civilian society.

“I have watched this week’s unfolding events, angry and appalled,” Mattis wrote.

The criticism was stunning because Mattis has generally kept a low profile since retiring as defense secretary in December 2018 to protest Trump’s Syria policy. Unlike other former administration members, Mattis had declined to speak out against Trump, saying he owed the nation public silence while his former boss remained in office.

Trump fired back on Twitter late Wednesday, calling Mattis an “overrated general” that he fired —

…His primary strength was not military, but rather personal public relations. I gave him a new life, things to do, and battles to win, but he seldom “brought home the bacon”. I didn’t like his “leadership” style or much else about him, and many others agree. Glad he is gone!

Mattis had a scathing description of Trump’s walk to a historic nearby church Monday to pose with a Bible, and he claimed law enforcement forcibly cleared Lafayette Square of peaceful protesters.

He said he never dreamed troops “would be ordered under any circumstance to violate the Constitutional rights of their fellow citizens — much less to provide a bizarre photo op for the elected commander-in-chief, with military leadership standing alongside.”

Mattis said of the protesters that Americans should not be distracted by a small number of lawbreakers. He said they are rightly demanding that the country follow the words of “Equal Justice Under Law” that are on display at the U.S. Supreme Court.

“The protests are defined by tens of thousands of people of conscience who are insisting that we live up to our values — our values as people and our values as a nation,” Mattis said.

Mattis took particular issue with the use of force to move back protesters so Trump could visit St. John’s Church the day after it was damaged by arson during riots. Several different groups, including the National Guard and the U.S. Park Police, were involved in securing Trump’s walk.

“We know that we are better than the abuse of executive authority that we witnessed in Lafayette Square. We must reject and hold accountable those in office who would make a mockery of our Constitution,” Mattis said.

Mattis left his job as the secretary of defense one day after Trump announced he was bringing U.S. troops home from Syria. Mattis had tried but failed to change Trump’s mind.

Trump soon turned on Mattis, calling him a failure. He said that he had fired Mattis.