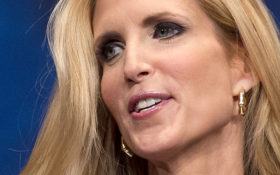 Now that he’s president, Coulter has become one of his biggest critics. She has called Trump “the biggest wimp ever to serve as President of the United States”  and said gave in to Democratic demands during after the January government shutdown.

Trump hit back on Twitter this weekend, calling Coulter a “wacky nut job” in response to her recent criticism.

Coulter recently appeared on HBO’s “Real Time with Bill Maher” where she unleashed a tidal wave of criticism on Trump.

“I promise you the country would be run much better if I had a veto over what Donald Trump is doing,” Coulter said regarding Trump’s border wall promise. “It’s crazy that I expect a president to keep the promise he made every day for 18 months.”

Wacky Nut Job @AnnCoulter, who still hasn’t figured out that, despite all odds and an entire Democrat Party of Far Left Radicals against me (not to mention certain Republicans who are sadly unwilling to fight), I am winning on the Border. Major sections of Wall are being built…

….and renovated, with MUCH MORE to follow shortly. Tens of thousands of illegals are being apprehended (captured) at the Border and NOT allowed into our Country. With another President, millions would be pouring in. I am stopping an invasion as the Wall gets built. #MAGA

Coulter has yet to respond to the tweets.

We want to hear from YOU. Who do you agree with: Coulter or Trump?