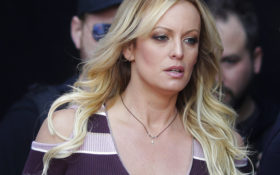 In a filing submitted to a Los Angeles court on Monday, the president requested that Daniels pay up to $342,000 in lawyer fees after a federal judge threw out her defamation suit against Trump.

The president insisted that Daniels did not file the action against him in “merit” but instead for “ulterior purposes.”

Daniels sued Trump in April after he said a composite sketch of a man she said threatened her in 2011 to keep quiet about an alleged affair with the real estate mogul was a “con job.”

Trump tweeted the man was “nonexistent” and that Daniels was playing the “Fake News Media for Fools.”

A sketch years later about a nonexistent man. A total con job, playing the Fake News Media for Fools (but they know it)! https://t.co/9Is7mHBFda

On Oct. 15 a federal judge tossed the defamation lawsuit against the president on the grounds of free speech.

The judge also ruled that Daniels must pay for all of Trump’s legal expenses.

Trump submitted his filing on Monday, and wrote that Daniels, “filed this action, not because it had any merit, but instead for the ulterior purposes of raising her media profile, engaging in political attacks against the president by herself and her attorney, who has appeared on more than 150 national television news interviews attacking the President and now is exploring a run for the presidency himself in 2020.”

The Washington Examiner has reported that the president is requesting $341,559.50 in attorney’s fees from Daniels.

In response to the filing, Daniels’ lawyer Michael Avenatti insisted, “this is a number created out of whole cloth,” adding, “it is nothing compared to what he will owe my client from the main NDA case.”

He has also signaled that he has plans to keep Daniels’ case alive.

It turns out that the nearly $600,000 that anti-Trump activists helped raise for Daniels will mostly be used on paying Trump’s attorney’s fees.

Looks like this defamation case backfired — and is now going to cost her liberal supporters enormously.