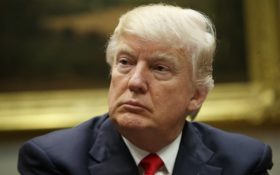 President Donald Trump is known for speaking his mind — and after a deadly Islamic terror attack in New York City on Tuesday, he refused to hold back.

Warning: Liberals may be triggered.

Denouncing the suspect as an “animal,” Trump on Wednesday urged much tougher immigration measures based on skills and other merit — rather than a lottery system helped put into place by Sen. Chuck Schumer.

Trump noted during a Cabinet meeting that the driver in Tuesday’s attack entered the country through the “Diversity Visa Lottery Program” and called on Congress to “immediately” begin working to eliminate the program, which applies to countries with low rates of immigration to the U.S.

Trump added, “We have to get much tougher, much smarter, and less politically correct.”

Schumer fired back from the Senate floor, accusing Trump of “politicizing” the tragedy.

Officials said the attacker is an immigrant from Uzbekistan. Department of Homeland Security spokesman Tyler Houlton said he entered the United States legally under the diversity visa program in 2010.

Trump has backed legislation that would shift the nation toward a system that would place an emphasis on merit and skills over family ties.

The comments followed Trump’s Tuesday night statement that he had ordered DHS “to step up our already Extreme Vetting Program.” Trump’s policy entails more stringent investigative measures to identify would-be immigrants who may sympathize with Islamic extremists or pose a national security risk to the United States.

The current visa program provides up to 50,000 visas annually by lottery. Applicants must have a high school diploma or meet work experience requirements.