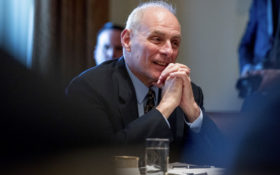 The Trump administration is naming some names in its efforts to shame local jails that don’t cooperate with immigration authorities. It’s putting the spotlight on Travis County, Texas, home of liberal Austin.

The administration released a list of 206 cases of immigrants released from custody despite requests from federal agents to keep them locked up. Roughly two-thirds were from Travis County.

The 206 figure is somewhat murky. It doesn’t represent all the cases in which immigration authorities sought custody of people facing criminal charges, with major cities like New York and Los Angeles underrepresented on the list. The cases were identified by the administration between Jan. 28 and Feb. 3, but most of the detention requests had been made before then, as far back as early 2014. Also unclear is the status of the immigrants — whether some are in federal or state custody.

The release of the list by Immigration and Customs Enforcement was prompted by an executive order signed by President Donald Trump in January. That order called on the government to document which local jurisdictions aren’t cooperating with federal efforts to find and deport immigrants in the country illegally.

Trump has made immigration a key issue in his administration and has promised to deport “bad dudes” living in the United States illegally. The report highlights a variety of crimes, including the case of a Jamaican national in Philadelphia charged with homicide, along with multiple sex offenses, assaults and driving under the influence cases. The majority of the immigrants whose cases are highlighted are from Mexico or Central America. The Travis County cases also include detainers for a mix of convictions and charges ranging from drunken driving to aggravated assault and sexual assault. Detainers are government requests that an illegal immigrant who could face deportation be turned over to immigration authorities.

The report appears to make an example of Travis County, where a fierce battle is underway between left-leaning local leaders and Texas’ conservative leadership over cooperating with federal agents. Unlike in liberal New York and California, Texas has threatened to cut funding from any local government that doesn’t comply with federal immigration directives.

Travis County processed hundreds of annual detainer requests as recently as two years ago. But Sheriff Sally Hernandez, a Democrat, was elected last fall after campaigning on a vow not to comply with immigration detainers in cases where people were arrested on minor offenses unrelated to their being in the country illegally.

Republican Gov. Greg Abbott responded by blocking $1.5 million in state grant funding. He issued a statement shortly after the report’s release calling it “deeply disturbing” and suggesting Hernandez’s decision was “dangerous and should be criminal in itself.”

Hernandez’s office on Monday sought to clarify the numbers in the report. All but one request linked to Travis County has a rejection date of Feb. 1. According to Major Wes Priddy, a spokesman for Hernandez, that’s because Travis County’s new policy on detainers went into effect that day, covering some requests made months earlier.

“They asked for formal notification from us, and we provided that,” Priddy said.

Jails and police agencies around the U.S. have opted in recent years not to illegally refuse to cooperate with immigration authorities, in some cases citing federal court rulings that illegal immigrants cannot be held in those jails strictly because of their criminal status. Other jurisdictions have passed local ordinances barring cooperation.

As a result, the Obama administration dramatically reduced the number of detainers filed annually — a trend Trump’s immigration authorities have pledged to reverse.

ICE said that nationwide, from Jan. 28 to Feb. 3, it made 3,083 new requests to jails that immigrants accused of a crime be held long enough for ICE agents to take them into custody. It is unclear how many of those requests were honored.

The number of requests made and declined is likely to increase as the government issues more detainer requests, immigration officials said. The officials briefed reporters on the condition of anonymity.

Acting ICE Director Thomas Homan said that when detainer requests aren’t honored and serious offenders are released, “it undermines ICE’s ability to protect the public safety and carry out its mission.”

Trump has said he plans to crack down on so-called “sanctuary cities” and other jurisdictions that do not cooperate with immigration authorities and has threatened to eliminate access to some federal grants. He also plans to restart the Secure Communities program that used fingerprints collected in local jails and shared with the FBI to identify illegal immigrants who could face deportation.