Trump SLAMS Iran (Obama will NOT be happy…) - The Horn News 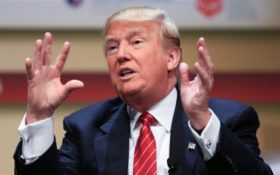 President Donald Trump has long promised to roll back the weak policies of former President Barack Obama– and in terms of Iran, what Trump just said proves he’s committed to tough action.

On Trump’s first visit to Israel as president, he talked about a growing recognition among Muslim nations around the world. Trump said these nations share a “common cause” with the United States and our determination to keep Iran from seizing power in the region.

“We have before us a rare opportunity to bring security and stability and peace to this region and to its people,” Trump said upon his arrival in Tel Aviv, the capital of Israel.

Speaking to 50 Arab and Muslim leaders, Trump was a stark contrast to Obama.

Instead of weakness, Trump specified exactly that what that opportunity meant, saying “For decades, Iran has fueled the fires of sectarian conflict and terror. It is a government that speaks openly of mass murder, vowing the destruction of Israel, death to American, and ruin for many leaders and nations in this very room.”

Trump blamed Iran for the struggle to achieve peace in the Middle East, calling for “all nations of conscience” to come together and “isolate it, deny it funding for terrorism… and pray for the day when the Iranian people have the just and righteous government they so richly deserve.”

It’s a radical departure from Obama’s foreign policy dealings with Iran, specifically a call to roll back the nuclear deal that was negotiated in 2015.

And it has supporters thrilled.

Secretary of State Rex Tillerson slammed Obama’s failed nuclear deal last Wednesday, saying it, “fails to achieve the objective of a non-nuclear Iran,” and accusing the Obama administration of “buying off” a foreign power.

Gulf Arab countries long have been suspicious about Iran, whether that’s the United Arab Emirates’ long-running dispute over Iran seizing several Persian Gulf islands from it in 1971 to Bahrain’s simmering anger over a 1981 coup attempt it blamed on the newly formed Islamic Republic.

The Obama administration’s nuclear negotiations further fueled Gulf nations’ worries about Iran’s regional intentions, especially as it backs Shiite militias fighting the Islamic State group in Iraq and supported the government of embattled Syrian President Bashar Assad that many had opposed through supporting rebel groups there.

In contrast, Trump’s speech Monday warned the world that the United States would no longer be a pushover to Iran.