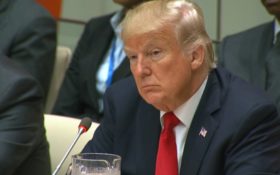 An enraged President Donald Trump unloaded on an establishment Republican senator who fears the country could be edging toward “chaos” and the two engaged in an intense and vitriolic back-and-forth bashing on social media Sunday.

In political discourse that might once have seemed inconceivable, Sen. Bob Corker, the GOP’s foreign policy expert in the Senate, felt compelled to answer his president’s barbs by tweeting: “It’s a shame the White House has become an adult day care center. Someone obviously missed their shift this morning.”

In an interview Sunday with The New York Times, Corker said Trump could set the U.S. “on the path to World War III” with threats toward other countries. Corker also said Trump acted as if he was on his old reality-TV show and that he concerned the senator, adding: “He would have to concern anyone who cares about our nation.”

Corker also said his concerns about Trump were shared by many establishment Republicans, the paper reported.

In a series of stinging tweets earlier in the day, Trump unloaded on Corker:

Senator Bob Corker "begged" me to endorse him for re-election in Tennessee. I said "NO" and he dropped out (said he could not win without…

..my endorsement). He also wanted to be Secretary of State, I said "NO THANKS." He is also largely responsible for the horrendous Iran Deal!

…Hence, I would fully expect Corker to be a negative voice and stand in the way of our great agenda. Didn't have the guts to run!

Bob Corker gave us the Iran Deal, & that's about it. We need HealthCare, we need Tax Cuts/Reform, we need people that can get the job done!

Corker always had been one to speak his mind. Already, there was the prospect of even more elbow room to say what he wants and to vote how he pleases over the next 15 months — likely against Trump and the party’s leaders on Capitol Hill as they look to get their agenda on track.

Corker’s comments drew a rebuke Monday from White House Counselor Kellyanne Conway, who said on “Fox & Friends” that she finds “tweets like this to be incredibly irresponsible.” She added that the president’s door is always open to speak with lawmakers privately.

Corker delivered a rebuke of the Trump White House after the president’s tweets scoffing at Tillerson’s diplomatic efforts to resolve the crisis with North Korea. Corker said Tillerson, along with Defense Secretary Jim Mattis and White House chief of staff John Kelly, are “those people that help separate our country from chaos.”

And Corker will be at the center of what may be a stormy debate over the future of the Iran agreement. Trump’s hostility toward the deal has stoked concerns he’s aiming to dismantle the international accord despite Europe’s objections. Corker is opposed to scrapping the agreement outright.

“You can only tear these things up one time,” Corker said. “It might feel good for a second. But one of the things that’s important for us is to keep our allies with us, especially our Western allies.”

Corker is the latest longtime career politician to face Trump’s wrath. The president in recent months has lit into Senate Majority Leader Mitch McConnell over the failure of the GOP to repeal and replace Obama’s health care law, and specifically targeted Sens. John McCain and Lisa Murkowski for their opposition to GOP health legislation.

Corker, 65, announced last month that his second, six-year term would be his last.

Corker in August delivered a blistering assessment of Trump in the wake of the president’s contentious remarks about the violence in Charlottesville, Virginia. Corker said Trump hasn’t “demonstrated that he understands the character of this nation.”

Trump fired back, tweeting that Corker’s comments were strange “considering that he is constantly asking me whether or not he should run again in ’18.