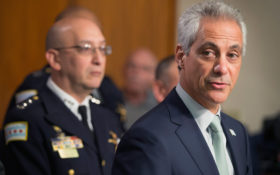 The city of Chicago is notoriously corrupt, and in recent years the Democratic leadership of the city has let violence spin out-of-control.

President Donald Trump took to his 21st century version of the bully pulpit to serve notice to former President Barack Obama’s pal, Mayor Rahm Emanuel: Either stop the bloodshed, or Trump is ready to send in federal agents to protect American citizens.

Chicago Police Superintendent Eddie Johnson responded late Tuesday, saying: “The Chicago Police Department is more than willing to work with the federal government to build on our partnerships with DOJ (Department of Justice), FBI, DEA (Drug Enforcement Administration) and ATF (Bureau of Alcohol, Tobacco and Firearms) and boost federal prosecution rates for gun crimes in Chicago.”

Emanuel, a longtime political ally of Obama, has previously confessed frustration at his own inability to get Chicago’s crime rate under control.

Earlier this month, before he took office, Trump tweeted that Emanuel should ask for federal help if he isn’t able to bring down the homicide rate. Last year, the death toll soared to 762 — the most killings in the city in nearly two decades and more than New York and Los Angeles combined.