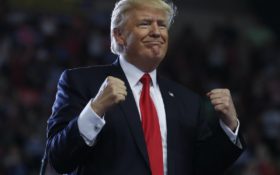 In celebration of his 100 days in office Saturday, President Donald Trump spoke to a crowd of supporters in Harrisburg, PA — and unleashed a firestorm on one of his biggest opponents, New York Sen. Chuck Schumer.

The audience loved it.

Schumer is one of the leading opponents against funding for the border wall in the government funding deal, and Trump is unhappy with Schumer’s willingness to hold America’s safety ransom to score political points.

“His policies are hurting innocent Americans and making it easier for drug dealers to enter our country. Schumer is weak on crime and wants to raise your taxes through the roof. He is a poor leader, and he is leading the Democrats to doom.”

Trump has repeatedly expressed concern of drugs and gang members making their way in the U.S. among the flood of illegals, and criticizes Democrats for their lack of concern for the safety of the American people.

“If Democrats knew what the hell they were doing, they would approve [the wall] so fast, as we want to stop crime in our country,” he told the crowd in Harrisburg.

While the wall isn’t included the the compromised budget, Trump assured voters there was no need for concern.

“Don’t even worry about it,” he told the crowd about the border wall. “Go home, go to sleep. Rest assured.”

He continued his anti-Schumer rampage in an interview that aired Monday on “CBS This Morning,” reiterating his belief that Schumer is a “bad leader.”

“He has no leadership ability. And he’s bringing them so far left they’re never going to win another election, believe me,” Trump said about the Democratic party.

Comment “Amen!” below if you support Donald Trump’s comments on Chuck Schumer!