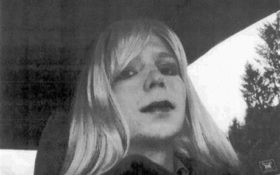 For most Americans, disgraced Army veteran Chelsea Manning is a villain for betraying her country for giving away U.S. military secrets.

For President Donald Trump, that doesn’t go quite far enough. After Manning published an opinion piece in The Guardian that called into question former President Barack Obama’s leadership, Trump fired back.

Ungrateful TRAITOR Chelsea Manning, who should never have been released from prison, is now calling President Obama a weak leader. Terrible!

Known as Bradley Manning at the time of her 2010 arrest, Manning came out as transgender after being sentenced to 35 years in an all-male military prison. Under Army rules, she was barred from growing her hair long while incarcerated, and only after litigation by her legal team was she approved for hormone therapy.