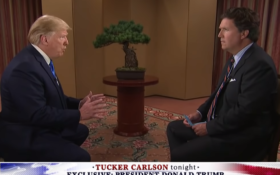 President Donald Trump sat down with Fox News Tucker Carlson during his visit to Japan, where the president took part in the G20 Summit.

Although Trump had been focused on establishing relationships with other world leaders, he revealed his concerns for another crisis on the rise back home in America.

The White House said Democrats are to blame — notably the liberals who run sanctuary cities where thousands, if not millions, of illegal immigrants are given refuge from Immigration and Customs Enforcement.

Many people on the streets are “living in hell,” Trump told Carlson. “And this is the liberal establishment. This is what I’m fighting.”

Cities such as Los Angeles and San Francisco have become increasingly overwhelmed by a growing homeless population. Reports of Americans forced to sleep in makeshift homes from raggedy tents and plastic bags on the streets on America’s most famous streets.

The Los Angeles Homeless Services Authority’s latest report said there are nearly 60,000 homeless people in the city, a 12 percent jump from 2018. It’s proof that conditions are only deteriorating for more and more of America’s poorest in the city.

Meanwhile, in Republican-controlled Texas, homelessness is on the decline.

Trump warned that if the Democrats can’t do something to solve the problem, the federal government may intercede.

“They can’t be looking at scenes like you see in Los Angeles and San Francisco. San Francisco… so we’re looking at it very seriously. We may intercede. We may do something to get that whole thing cleaned up.  It’s inappropriate.”

“When we have leaders of the world coming in to see the President of the United States and they’re riding down a highway, they can’t be looking at that. I really believe that it hurts our country.”

“Some of them have mental problems where they don’t even know they’re living that way,” he said. “In fact, perhaps they like living that way. We cannot ruin our cities. And you have people that work in those cities. They work in office buildings and to get into the building, they have to walk through a scene that nobody would have believed possible three years ago.”

You can watch the full-length interview below: