Trump SILENCES Whoopi Goldberg (she has no comeback!) - The Horn News 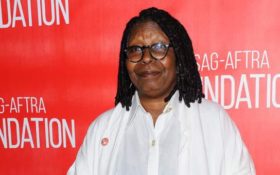 On Tuesday’s episode of “The View”, the hosts talked about the ongoing devastation in Puerto Rico, and notorious anti-President Trump host Whoopi Goldberg made an outlandish statement about the president – one she is now undoubtedly regretting.

It was a bizarre attempt to suggest the President of the United States doesn’t know who American citizens are, and she reiterated it a second time!

Well at least she took responsibility for the statement, because Trump just proved her incredibly wrong.

And he attended a hurricane briefing. He called a meeting of agency heads tasked with helping Puerto Rico recover, and sent top officials out to the White House driveway to talk to reporters. FEMA Administrator Brock Long delivered specifics: 16 Navy and Coast Guard ships in the waters around Puerto Rico and 10 more on the way.

Throughout, Trump stressed that Puerto Rico’s governor had praised the federal response, characterizing Ricardo Rossello as “so thankful of the job we’re doing.”

And that’s not all he’s done.

Trump on Thursday waived federal restrictions on foreign ships’ transportation of cargo to the island. He tweeted that relief supplies are getting through.

“The electric power grid in Puerto Rico is totally shot. Large numbers of generators are now on Island. Food and water on site,” he wrote.

So while Goldberg sits in her comfy chair judging Trump, he’s taking action to actually help the people of Puerto Rico instead of criticizing others.

It’s clear her view from Hollywood is skewed, because Trump is doing everything in his power to help these American citizens.