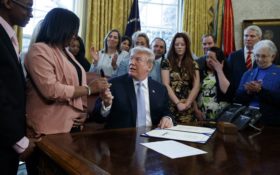 During a White House signing ceremony Wednesday, the president said the survivors “are very brave.”

Among those at the ceremony were Trump’s daughter, Ivanka, several members of Congress and families of victims.

The law passed Congress overwhelmingly. It weakens a legal shield for online services that host abusive content, including sex trafficking.

The protections made users of such sites as Facebook liable for the content. The legislation grew out of frustration that classified-ad sites can claim they aren’t the publisher of questionable content but are merely transmitting posts by others.

Trump called the issue “a tough one,” and handed one signing pen to the mother of a victim of the sex trade.