Trump makes an announcement about Melania - The Horn News 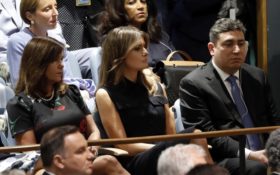 But he’s leaving it to the first lady to name the countries she plans to visit on what will be her first solo international mission.

The president was asked about Mrs. Trump’s trip Wednesday as he arrived at United Nations headquarters for a third straight day of meetings. He told reporters, “She’s going to four countries in Africa. She’s going to be making the announcement.”

Trump added that he and his wife “both love Africa.”

The first lady plans to announce some details of her upcoming trip at a reception she’s hosting Wednesday for visiting heads of state, heads of foreign delegations, U.S. officials and others who are in New York for an annual U.N. gathering.